Sorted out the parts

Sorting out the pieces!

Well, my 330GT America came complete…Completely in boxes! Over the course of 23 years of ownership, the previous owner, along with the help of two body shops, managed to almost totally disassemble the car. The only pieces left on the car is the suspension, the dash pad, the instruments, the rear window, and the gas tank, everything else is either half off the car, or in these boxes pictured here. 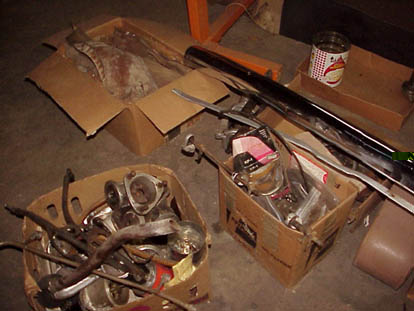 In this picture, starting from about 11 o’clock and working clockwise, there is a box of carpet pieces, the center part of the rear bumper, armrest pad, a box of badges with both ashtrays and throttle linkage, and in the third box, the distributors, oil filter fittings, and rear bumperettes.

As you can see, there was no rhyme or reason to how these parts were put in the boxes and figuring out what everything was could take days. I would never have bought this car if I didn’t have help in identifying all these pieces, and luckily, Francois Sicard came to my rescue. Francois has done a ground up restoration on a 330GT America a few years ago, not to mention a 250GTE after that. He is considered by many in the Ferrari world to be one of the best restorers of Vintage Ferraris. He’s restored dozens of models from a GTO, to a 250SWB, and will occasionally work on a 308! I could not ask for a better teacher to guide me through my restoration. 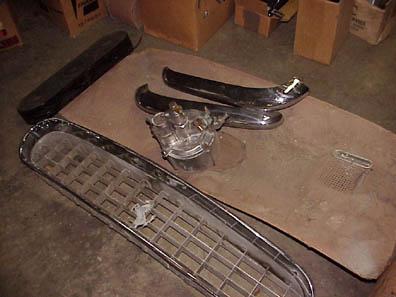 Certain things were easily recognizable, like the famous Ferrari grill, and the long air cleaner that sits on top of the V-12 engine, but small brackets, and trim bezels would have been impossible for me to identify. The next day after unloading the truck load of parts, we methodically unpacked each box. Francois began putting trim pieces with trim pieces. I put interior handles and window cranks together. Any piece I didn’t recognize, Francois would immediately direct the part to it’s respective area. Because the previous owner restored many different makes and models of parts, it was inevitable that we would get some rogue parts. Occasionally I would hold up a piece, and Francois would pause, look again, and say in his French accent, “Not Ferrari!” 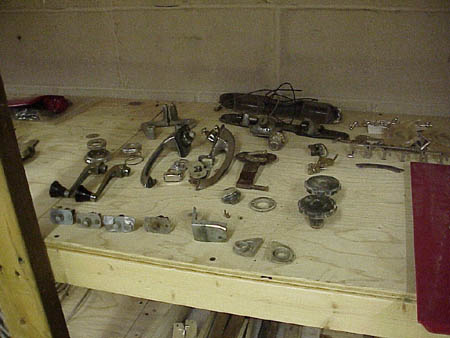 Within two hours we had sorted through all the boxes, and laid out the pieces in different areas of the garage. Francois began to count the individual trim pieces that would make up the side window surrounds, and the scuff plates for the doors. These pieces were made of aluminum, and were individually cut and bent to fit certain parts around each door, and window. By the care Francois took in counting and placing these pieces, I knew they were important. He explained that these pieces were expensive to replace, and may even need to be made from scratch if anything was missing. After counting and re checking all the boxes a few times, we discovered we were only missing one scuff plate out of the eight or ten separate pieces. The missing piece was largely flat aluminum, and I guess if I can’t find one off another car, I can always have it fabricated.

We discovered by the end of the day that only three things were missing on the whole car! One being the scuff plate, two being a trim bezel for a window crank, and three being the heater box that houses the blower motor. The heater box will probably be the hardest thing to replace, but as in life, everything is replaceable, for a price!