This is the first day of work I was going to get on the 330. After getting all my tools together I was ready to tackle whatever this old Ferrari was willing to give me, or so I thought…

The first thing I wanted to do was to remove the brake calipers. The lines need to be blown out, and the calipers need to be cleaned and checked. If the bores are rusted, which they probably are, I’ll send them to “White Post” for a rebuild. 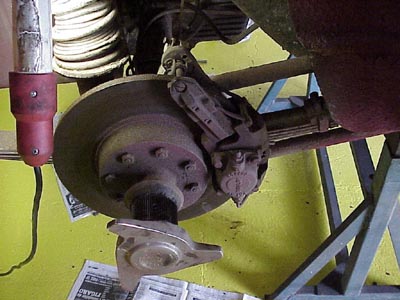 I figured brakes are brakes, so I would probably have all four calipers on the ground by the afternoon. After I loosened one of the brake lines, I smelled the worst smelling brake fluid I’ve ever smelled. All that fluid was probably sitting in the lines for the past 25 years! I’m sure lots of water was sitting with the brake fluid rotting everything it touched. Next step was to disconnect the parking brake cable since I was working on the rear brakes first. Once the cotter pin was removed, I tapped (more like banged) the pin out holding the linkage to the caliper. The work was slow, but I didn’t want to brake anything, not to mention I was working in 85% humidity!

The next step was where I ran into problems. I got a wrench on the back of the caliper to remove the large bolts holding it to the bracket. They were TIGHT! I soaked everything with penetrating oil, and banged away some more. After about 30 minutes of struggling, I got one caliper off. The next one was even harder! This time, the bolts just wouldn’t budge. 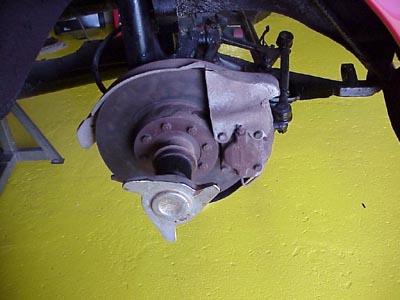 Getting frustrated, and sweaty, I decided to try the fronts. No luck with any of those either! I figured I would have to go and borrow a pipe to get more leverage on the bolts. Instead of getting even more frustrated, I figured I’ll try something else.

The gas tank needs to come out because it will inevitably be rusty inside. It’s held on by four nuts that are cotter pinned in place. As soon as I got the cotter pins off, I realized I couldn’t hold the blind bolts while I tried to take the nuts off. None of my tools would fit in the small area, so there must be a special tool I would have to get. Another dead end brought me to the next project.

The shocks need to come out, so I started with the rear ones. These nuts were seized as well! As I soaked these with penetrating oil, I desperately tried to find something to complete! I couldn’t even remove the steering wheel because a special thin wrench is needed to slip in the confined space behind the hub!

It was definitely time for a break. I decided to go to Francois’ house for guidance, and tools. I put the top down on the Alpine, and tried to clear my mind with the warm summer air. At least the Alpine started, and ran like a top. I love that car!

With a fresh start, I was ready to tackle the car again. The pipe I borrowed made easy work of all the bolts that I could reach, but soon, I reached another dead end. Some bolt just would not budge. 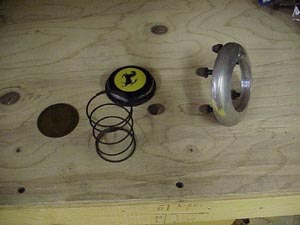 I decided to cut my losses, and at least remove the steering wheel so I could start sanding off the varnish at home. I called it quits at about 9 pm, a little defeated, but not disgusted. Besides, it was Friday the 13th! It could have been a lot worse!