More suspension stuff, and pics of a 250LM 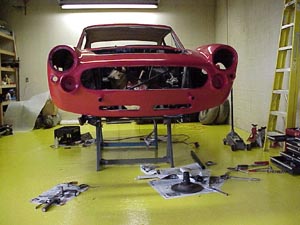 What a contrast to last week! François helped loosen some of the seized bolts, I had the right tools to break the hard to get nuts, and the temperature was in the mid 70s. I was ready for a long fruitful day!

The front calipers came off without a hitch, and the left rear one came off as well. The right rear caliper, however, was a problem. One bolt would not budge no matter what I did. The bolt is not in the most accessible place, so I wanted to make sure I didn’t strip the head because then I would be in big trouble. I decided to try and get better access by removing the shock. François had me remove the parking brake portion of the caliper as well. This was no easy task considering the locating pins had not been moved in 35 years! Penetrating oil has become my new after shave. Everything I own smells of penetrating oil!

Taking a break from the caliper, I removed all the other shocks. They all had various states of resistance, but they all eventually came out. We will clean them up, and see how well they work. If they’re bad, it’ll be another thing on my list to either rebuild or buy. 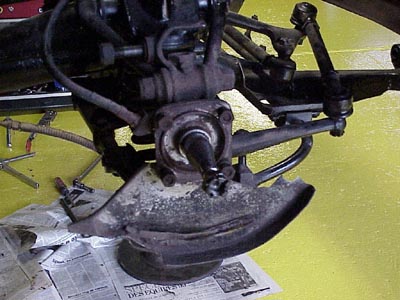 The front hubs came off after I finished cleaning the shocks. The hub nut took a ton of force to get loose. I had a three foot pipe on my breaker bar pushing on the hub nut. I’m glad I recently purchased a breaker bar, ’cause I would have never put that much stress on a regular ratchet. The rear hub needed to be held in place while pressure is put on the hub nut. I temporarily replaced the rear caliper and wedged a vice-grip against the caliper by clamping it to the disk. Soon I had all three hubs on the floor, and had to return to the last caliper that was still not cooperating.

Working late into the evening, I finally got the parking brake portion of the right rear caliper off, but was too tired to continue wrestling with the bolt. That night, I slept like a log! 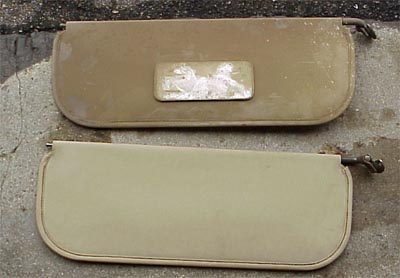 I decided to do something completely different from working on the suspension and began looking at the interior of the car. I took off the sun visors and tried to clean them. They show promise, so I’m going to get a soft scrub brush and try to get the dirt out of the “moonstone” textured fabric. Next task was to strip the rear shelf by the rear window. Although this area will be covered by leather upholstery, I will have the satisfaction to know that it is clean under the panel! 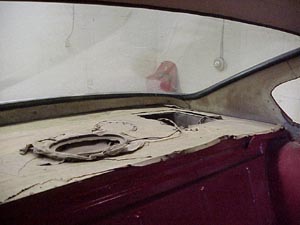 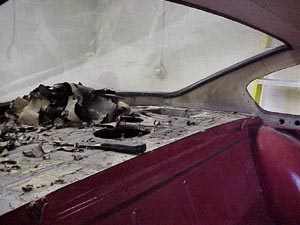 17 hours later I completed my first marathon session of work on the 330GTA. It was much more more productive than last week, and I’m in a much better frame of mind to attack the gas tank in a couple of days.

Whenever I need inspiration on my project, it’s always good to see what François is working on. 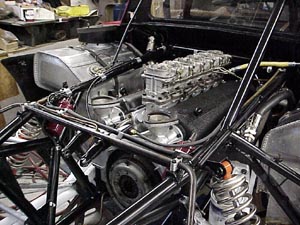 The work he does is considered the best in the Ferrari community, and an example is found in this 250 LeMans. Although this car is worth more than 1.6 million in today’s market, its detailing is similar to mine, and other Ferraris of its era. I will be removing my suspension pieces and nickel plating them just like this 250 LM. 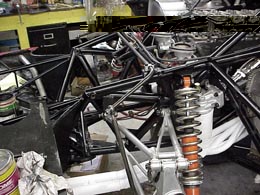