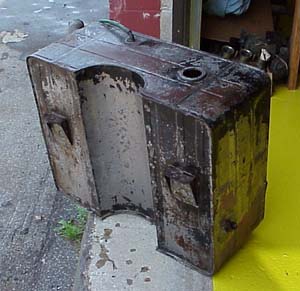 After days of soaking in penetrating oil (thanks to those who suggested what to use), I got the gas tank to come out of it’s hiding place. The nuts were not badly seized, but the cotter pins, and the bolts were hard to get at. The tank is held in place by only four bolts and they are in a very awkward place to hold as you try to turn the nuts. Trying my best not to get frustrated, I went on to another part of the car and left the gas tank alone for a couple of days. Sometimes it takes a few days for a new plan of attack and a special tool. François’ specially bent wrench didn’t seem to work for me and I wasn’t going to wait for him to return from Pebble Beach to show me how to get a couple of bolts out! On the drive up to the shop, it all clicked in my mind what kind of tool I could easily make that would fit in the tight spot. 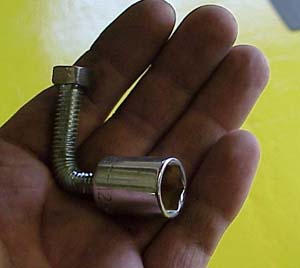 So here it is, my first home fabricated tool, the first of many I believe I’ll be making to restore this Ferrari!

When we were going over a game plan of what I would have to remove before I began re-assembling the car, the gas tank was on the list of  “must remove.” While I was soaked in sweat, and penetrating oil, and having dirt fall into my eyes, I asked myself why remove this %#&* gas tank anyway?! I didn’t look rusty or leaky, but François insisted it was absolutely necessary. When I finally got the darn thing out, and shook the tank, François insistence was justified. It sounded like a quart of sand and loose rust was sliding around the bottom of an otherwise solid gas tank. All this dirt and rust would have inevitably ended up clogging the jets in my newly rebuilt carburetors, and everything else before them. Another reason why I will continue to follow François Sicard’s instruction completely! 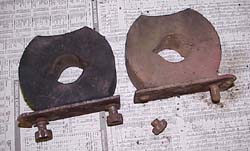 Another casualty of rust and it’s effect on bolts is in the right rear bump stop. Unfortunately I did not have to remove it, but in my overzealous excitement to clean old parts, I decided to take the bump stops out and take off the red over spray. The first one cleaned up nicely, but the second one sheared it’s bolt. Now I’ve got to get a new bolt welded back on. Another lesson was learned, unless I’m making a concourse car (which I’m not) stop taking things off the car that will cause extra work!