All the calipers finally came off. More penetrating oil, and some creative leverage got the final bolt to release the right rear caliper. It’s amazing to think that it took three working days to get one stinking bolt to come off! 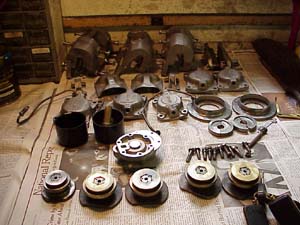 I took the remaining caliper to join it’s brothers over at François shop for a nice degreasing and sand blasting. The first three calipers had their pistons blown out with pressurized air, but one piston is seized (surprise, surprise!). Water must have gotten into the caliper, and rusted the piston to the caliper. The next alternative is to use grease instead of air to pressurize the piston out. All the caliper bodies look very nice, cleaned and shiny. They will be going to the platers for nickel plating.

Speaking of nickel plating, the next thing I’ve got to remove from the car for plating is the front suspension. Before François removes the tie rod ends and pitman arms with his puller, I had to remove all the cotter pins. I’m getting better at cotter pins and realized there is patience, skill, and certain tools needed to removing cotter pins. All this can be read about in my soon-to-be-released book, “Zen and the Art of Cotter Pin Removal.”

After I got all the cotter pins removed, it was time to try and revive the head liner. It seems that the painter of this car failed to mask things off well and got red over spray on the head liner. Now in most cases, one would just install a new headliner, but my case it’s a little different. First of all, to correctly replace a headliner, one must remove all the window glass. The front windshield has already been removed, but the rear glass is still in place. Ferrari glass is irreplaceable, and VERY expensive (over $2000) if one can actually find a useable piece from a parts car, so you can understand my trepidation in removing a perfectly fine rear window. Secondly, I’m trying to do a “budget” restoration, and anything I can save, I will save.

The question is what to use to take off the paint without ruining the plastic head liner? I spoke to as many people that could advise me, and I received as many suggestions as there were people! A paint shop owner gave me a can of enamel reducer, a friend suggested “zip strip,” and another friend suggested acetone VERY SPARINGLY! The one tip I took very seriously was to start with the least offensive cleaner, and work my way up. The only problem was, what’s harsher, enamel reducer or “zip strip?” 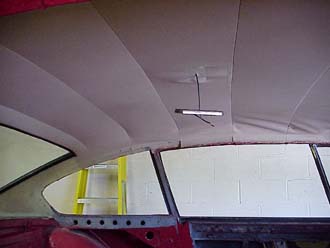 The good news was that I never was faced with putting my solvents in ascending order because the first cleaner worked! I bought a spray bottle of “Simple Green.” It said it was non-toxic, which was a plus considering there isn’t much ventilation inside a car with solvent dripping down from the headliner! I got a scrub brush, a bucket of water, and a sponge and began cleaning. All the dirt, and wet sanding slurry came right off, and when I got to the over spray, it slowly started coming off. The soft brush was able to get most of the paint out of the “moonstone” texture of the head liner. I’m going to get a toothbrush and get the remaining paint so I don’t damage the surface with the larger brush. There are some stains that won’t come off, so I will have the upholsterer look at the head liner and tell me my options. Dying the headliner may still be an option considering the stains are light. I also think the wrinkles can come out with a heat gun, but I’ll leave that in the capable hands of the upholsterer.

While I was removing the dome light I was impressed wit the design of the light. I’ve worked with all makes of cars, but am beginning to see the craftsmanship in Italian cars. Many of the fixtures are well designed, and can be reused simply because they were sturdily designed. 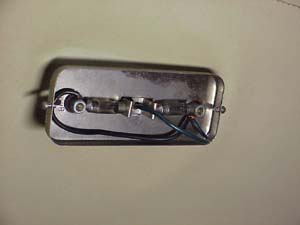 Take this dome light for example. The wires attach to the fixture by a small set screw, not a crimped bullet connector riveted in place as found in other cars of that age. Admittedly, this car was designed and built at a time when money was less of an object than the pure craftsmanship of the car, but I guess that is why I own a car built before the “bean counters” took charge!