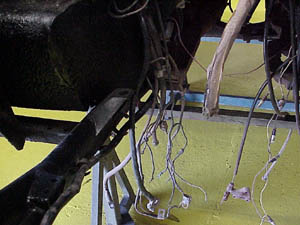 Now that the engine compartment is painted, I can tackle the next big project; the electricals. The previous owner bundled all the under hood wiring and wrapped it all up in craft paper and masking tape. As I tore away the sarcophagus, I was a little frightened about what I was going to find. I’ve seen mechanics simply cut every wire to every accessory to save time in disconnecting all the wires, but luckily, most of the connectors were still present. Unfortunately the wrapping of the wires did not occur until after a coat of primer was sprayed over them. I guess some previous paint shop began spraying the primer on the car before they decided to cover the wiring!

Before I could even figure out where all the wiring went, I needed to clean everything. I got some lacquer thinner and a rag and began cleaning every wire. I didn’t do a thorough job because I was anxious to lay the wire out to see what was missing. The fate of my preceding two weeks would be decided by how bad the wiring was. Within 30 minutes, I figured out most of the wiring for the front lights, fog lights, ignition, and alternator. Having François leave a concourse restored 250 GTE nearby certainly was the reason for this speedy deciphering.

Now that I know all the wiring is present, I’m going to unstring the loom and do a more thorough cleaning. The fuse panel will also need to be scrubbed of its light coat of primer. I hope it stays warm enough to keep the doors open because that lacquer thinner can really make me high! 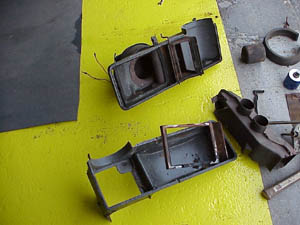 It was a short day of work for the Ferrari because I actually had to do some work on one of my other cars! My ’65 Mustang Fastback developed a heater core leak, so I’ve been rebuilding it between the Ferrari restoration jobs. When I first started working on Mustangs in high school, I remember the heater being a real bear of a job, but now that I’ve been working on the Ferrari, the Mustang was so easy!