I scrubbed more of the primer off the the wiring today. Pretty monotonous stuff, but it’s all part of the restoration process. I guess not every restoration day is filled with the excitement of assembling major components like the engine, or the interior. I have to remind myself that many days will be like this one, where I sit quietly cleaning something that most people will never see. I can imagine a day when I’m driving this car, and friends will admire its beauty, but still will never know of the countless hours I spent scrubbing dirt, and grease off old car parts! 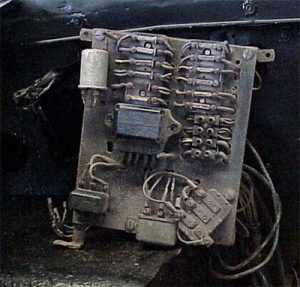 I cleaned the fuse panel with a toothbrush and lacquer thinner. Everything was covered in primer, but it’s beginning to come off. Unfortunately some of the stripes on the wiring comes off with lacquer thinner as well, so I have to be very careful. I’m not going to kill myself cleaning the fuse panel because it will be hidden behind a cover that I need to paint with black wrinkle paint. 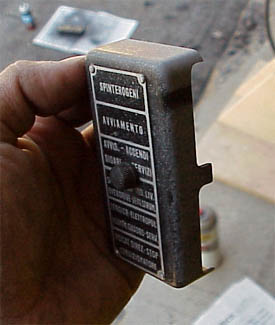 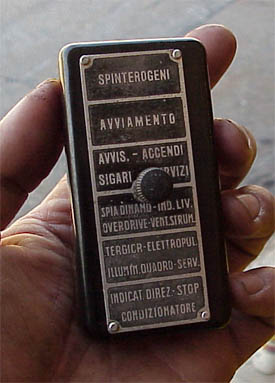 The fuse panel covers had primer over spray as well, and are going to be hard to clean well. The lacquer thinner is taking off the black paint that allows the raised letters in the aluminum label to read. I tried painting one of them, and wiping the paint off the letters, but it didn’t turn out too good, so I think I’m going to leave the other one alone. Thank goodness for that cover that will hide all these problem areas!

Another project that needs to be started for the engine detailing is the coil assembly. 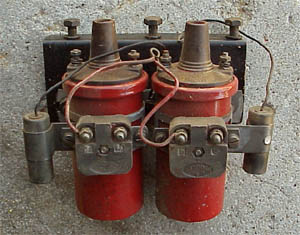 It seems that someone had tried to restore these before, but bad surface preparation leads me to do everything again. The bracket was covered in a black paint that felt tacky, and thick, and the rust underneath was showing through. The coils were painted red, but the paint is badly fish-eyed. This usually happens when the surface wasn’t thoroughly cleaned of oil or silicones (wd-40). I decided to re-do this whole sub- assembly because it is in a pretty prominent place in the engine compartment.

It’s amazing how for such a small item, how much time it will take to restore. First the part needs to be disassembled, then they need to each be stripped of paint and rust. Any paint that cannot be removed with a wire wheel have to be either sandblasted or chemically stripped. Once the chemical stripper is removed the part is ready for paint. Hours have to pass between coats. Trips to the store for the right color paint takes an hour, while special paint from Eastwood Co. take a week in the mail! It’s a good thing I have a long winter ahead of me! 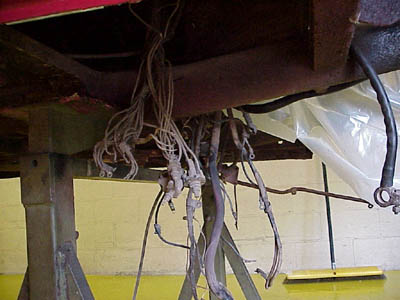 Another task for the upcoming months will be to decipher the many wires hanging from under the car. I hope that they will come together as easily as the engine compartment harness, but when I look at the bundle hanging as it does today, I’m a bit concerned!