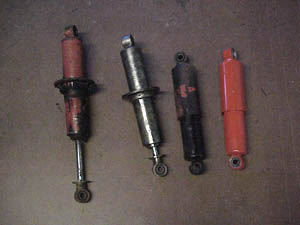 I started my day by collecting my shocks to ship them out to Koni. When I called Koni to ask about their services, I did not have the part numbers for my shocks but found their web site to have reference for a GTE. This was enough for me to get a rough estimate for a rebuilding price, but when I went to my shop today, I found my shocks to be slightly different. A 330 America (my car) is identical in body style to a late model 250 GTE, but evidently, not all parts are interchangeable. I would imagine having a larger engine, the 330 Americas received slightly different shocks. Hopefully, Koni will still be able to rebuild these at the same price! 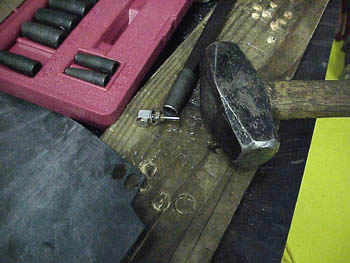 Another box of goodies came from “Eastwood Co.,” and included was a gasket making kit I wanted to try. The kit comes with a variety of punches that cut perfectly round holes in gasket material. I thought this would be just the tool to make gaskets for my windshield washer nozzles. When I tried to cut sheets of rubber with an X-Acto knife, I couldn’t get perfect cuts and they were never perfectly round. The punches worked much better than trying to cut rubber by hand.

Wrinkle paint also came with my “Eastwood” shipment, so I began preparing parts that needed this paint. My concerns, however, was whether it was warm enough to wrinkle paint. The instructions called for two thick coats applied consecutively with an optimum temperature of 70-90 degrees F. I am blessed with a heated garage, but it’s usually 60 degrees. When I painted with wrinkle paint in the past, it was done in warm weather where putting the part in the sun helped the paint wrinkle evenly, but after I painted my fuse panel, all I had was a heat gun to try and get the parts and paint warm. At first, it looked like nothing was going to happen, but after I left the part alone to dry, it began to wrinkle. A little bit of heat at that point helped the final wrinkling. 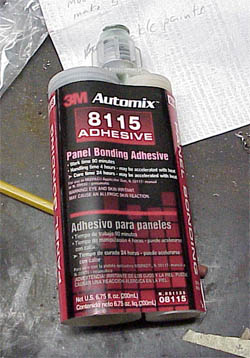 I bought some 3M Panel Adhesive to try on my floorpan patches. It’s supposed to be pretty strong stuff, and considering I was going to secure my panels with pop rivits, the adhesive would only make it stronger. I didn’t buy an applicator for the adhesive, as they recommend, but managed to push the right amount out of each tube to mix the adhesive. 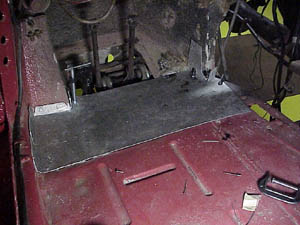 I made the driver’s side floor out of aluminum, and built a new mounting point for the gas pedal. When everything sets up, it should be far stronger than the old weakened floor. I will see how everything holds when I return sometime next week.