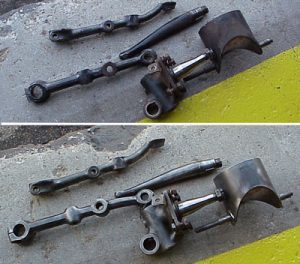 I cleaned more of my steering and suspension system today. The parts were cleaned and stripped of paint for either a new coat of paint, or nickel plating. Some big pieces are supposed to be bare steel, but I don’t know if I can stand to watch them rust all over again after I just stripped them clean. I’ve been thinking about painting them with a clear paint so they will keep their bare metal finish, but not rust to a nasty mess in a few years. I think it’s time to take a peek at that “””Eastwood Co..”” catalog again!

I decided to chemically strip the steering box rather than put it against a wire wheel because of all the crevices. Thick coats of paint covered the whole steering box, and the primer was especially stubborn to remove. I’m not sure why the paint was laid on so thick, but the ‘box will look much better with a normal layer of black paint! 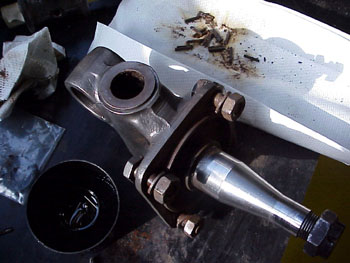 François had to force some of my suspension apart with his press, so I brought the pieces to his shop. The king-pin assembly showed a lot of water intrusion, so the needle bearings were a little rusty, 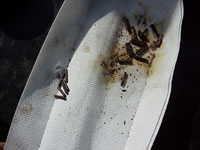 which explains the tighteness in the king-pin. Luckily the king-pin is salvageable, but the bearings were largely pitted, and will have to be replaced. He also pressed in some new fiber bushings used in the a-arm assembly, so I’m looking O.K.