Freeing the Radio, and Mold Making.

After many months in my possession, and thirty years entombed in the center console of the the car, the Blaupunkt radio has been released from it’s prison. Unfortunately I had to destroy the knobs to get the set screws out, but it was the only way. I soaked the screws, heated the screws, and applied pressure from every screwdriver I had, but the screws wouldn’t budge. After we destroyed the knobs, we realize why they were so stubborn. The plastic knobs had copper shafts where the hardened steel set screws were threaded into. Once corrosion set in, the dissimilar metals bonded so well nothing was going to get them apart. 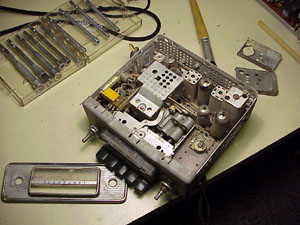 I immediately took the radio to Mike Azzurillo at the Ed Sullivan Theater Maintenance Shop (another CBS facility). I needed to have Mike open the case and have a quick look to see if it was salvageable. We were astounded to find that this radio was a “tube” radio because I always thought tubes had been replaced with transistors in the sixties! I couldn’t find any identifying marks as to what model it was, so I took some pictures of the radio and separate amplifier portion to see if I could find help on the internet.

While my radio is at the Maintenance Shop, I stopped by the Scenic Shop with my Pininfarina badge. I showed the Head Scenic Artist, Barbara Taylor my emblem, and explained my dilemma with the America script. She told me my timing was perfect because she was just about to start experimenting with some new mold making kits, and was looking for a piece to copy. She had several different materials for making molds from liquid type resins that you pour over the item you want to copy, to putty-like substances that you form over the piece. We decided that the best material would be the latter. The putty Barbara has comes in two forms, fifteen minute, and two hour curing. These putties are two part mixes that work very much like auto body filler, but instead of curing to a hard material, it sets up in a flexible rubber state.

When I was in Art School, we made plaster molds in a three-dimensional study class, so I was familiar with release agents and surface preparation when taking impressions of 3-D objects. I cleaned the dirt and residue off the test badge, and Barbara brushed on a latex coating. The putty was mixed, and pressed on to the badge as if it were still attached to a car to see if we would encounter any problems. This would help me prepare for when I wanted to copy a badge from a car without removing it. 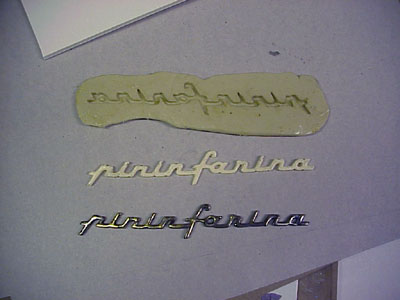 After sufficient time for drying, we pulled the badge out and inspected our work. So far so good, there was hardly any residue on the original, and any remains were easily removed with a fingernail. The next step was to pour a resin into the new mold to make a positive. Barbara chose a cream colored resin that she’s familiar with, but she had a couple to choose from in her shop. Once the positive was removed from the mold, we began removing the “casting flash” and any other extraneous material. Upon inspection of our finished product we were very happy with the results. We want to modify some of the steps to yield an even better result on our next try, but I definitely think we have a proven process for copying emblems! After we perfect this technique, Barbara will put together a kit to make a copy of an emblem. When I find a willing owner to let me copy the “America” badge, I can offer to copy the badge without removing it, or risk damaging it, and be done in a matter of minutes!

As I’m learning this new technique, I can’t help but feel like I’m a spy trying to copy a secret pattern. I will gain access to this emblem, but will only have a few minutes before I’m detected, so I’ll have to act fast! I’ve rehearsed this procedure dozens of times, so I can practically do it with my eyes closed. The time to sweat will be the necessary time it will take for the putty to set. Fifteen minutes can’t come quickly enough …DONE! Remove the mold, and clean all evidence of me being there. Put the mold in my pocket, and calmly walk out of the garage, and slip undetected into the crowd…. O.K., James Bond I’m not!