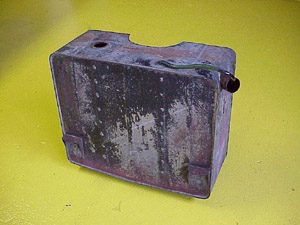 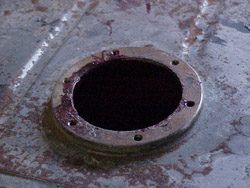 The gas tank came back from getting cleaned and coated. The coating they applied is scarlet in color and is different than the coatings I’ve seen in the past. The old coatings used to be cream colored, but this one is supposed to be a better formula. I’ve heard some horror stories of gas tanks getting coated years ago where the coatings would flake off or get dissolved by the alcohol additives sometimes found in gasoline. Hopefully with every new formula, the coatings are even better! 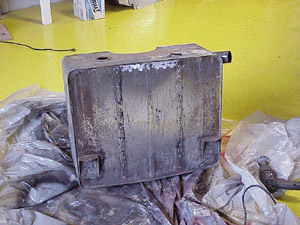 To save some money, I am going to clean and paint the exterior of the gas tank myself. This also allows me to do a better job than another shop. For instance, the tank shop patched a leak at the bottom of my tank, but laid on the lead solder a little thick. I managed to file some of this solder down and feather the edges so it wouldn’t be as noticeable once the tank is painted. These details may not have been addressed if another shop had done the surface preparation. 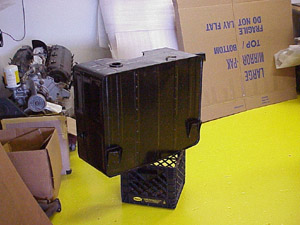 I first used a wire wheel attachment on my electric drill to get the old paint, rust, and dirt off the tank. The wheel also helped roughen the surface of the bare steel so the paint would stick better. The next step was to break out the last of the POR-15 I had from the undercoating job, and start covering the the tank. This hard durable coating would keep the tank from rusting again, and give a good surface for the final layer of semi gloss black paint. I made extra sure the mounting brackets were sufficiently coated, because this seemed like a perfect place to trap water and dirt to start the rusting process all over again. 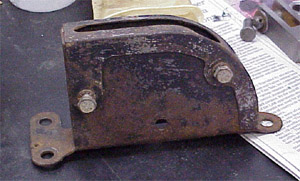 The parking brake was the next sub assembly I  started. I collected all the associated pieces from my shelves, and began separating what needed to be painted. The equalizing bracket was removed along with the cables that operate the rear brakes from under the car. I’m replacing the cable sheathing, but the cables themselves seem fine. All the parts were degreased and all the old paint and rust was removed. I used POR-15 here as well to prime the surfaces. The next restoration day will involve painting everything black, and assembling the pieces. I’ll definitely need François’ help putting this puzzle together. 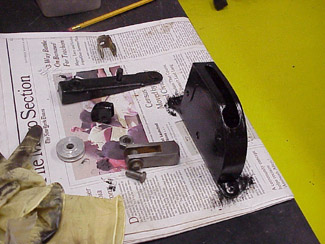 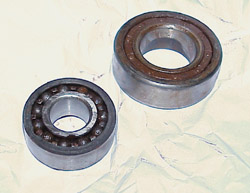 A continuing project has been the hub assemblies. The rear ones are together and waiting for the rear pistons to come back from the rebuilders. The front hubs were a little bit more involved. These hubs have two bearings per wheel, and are caged roller bearings. Unlike most hub assemblies I’ve worked with in the past, these hubs do not have cone shaped retainers and races that are held in place with a rear seal and the stub axle nut. These Ferrari bearings ride on the flat surfaces of the axle and are assembled together in one unit that loads from a rear and locked together with a screw-in cap. This cap in the rear of the hub requires a special tool to remove, along with he knowledge that there is a set screw under the rust that has to be first released! François methodically disassembled each hub, and handed me four gummed up bearings to wash out in his parts washer. 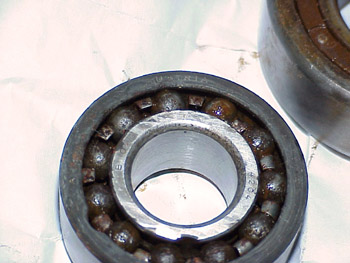 As I got the old grease out of the seized bearings, I found one outer bearing had been replaced with a non Italian bearing. The exposed balls were pretty pitted, and wouldn’t last very long if we reused it, besides. We also found rough spots in another bearing when we spun it. François went into his stash of used Ferrari bearings, and found two good replacements. After blowing out all the degreaser, and testing each bearing for smoothness, I had four good bearings to go back together in the hub. The Italian made bearings were harder to pack with grease, but with patience and time, I eventually got grease to fill the whole cage. I’m replacing everything with modern waterproof grease, so these bearings should last quite a while.