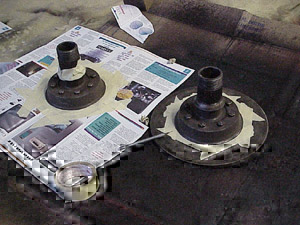 I got some high temp paint to paint the hubs of the brakes. They came bare steel from the Ferrari Factory, but rust pretty badly after years of exposure to the elements. Once the wheel is mounted, you’ll never see these surfaces, so François feels it’s better to put some paint on them to keep them from rusting further. I first put the wire wheel attachment on my drill, and removed all the loose scaly rust off, and then I degreased all the surfaces. After masking both wheels, and trimming the tape with an x-acto, I sprayed several coats of paint on each hub. The paint can says that it works better if the paint is first cured to 400 degrees, but I guess I’ll let the heat from using the brakes do the curing. 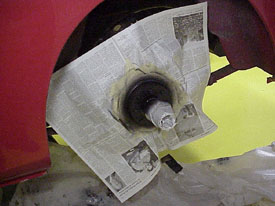 Since I was in such a rush to put on the rear hubs, I forgot to paint them, so I had to mask and paint them on the car. It was actually easier to paint these hubs because I could spin them while I painted.

Two assemblies were installed for what I hope would be the last time. Many times I find myself installing, and removing the same part for some reason or another. The pedal cluster was installed for the first time to check it’s alignment when I was fitting a new floor section, but had to be removed for rebuilding. It was removed another time so I could spray the undercoating. Finally, it was installed after many trial fittings to get the bracket to line up with the bolt holes. The previous owner had done some welding and fabricating in this area, so the pedal assembly didn’t fit perfectly. After some hammering, and filing, all the bolts fell in place, and the pedals now sit perfectly lining up with all the mounting points. Hopefully, it’s the last time I have to put it in! 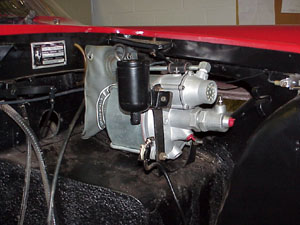 I got the green light to install the brake booster from François. It will not interfere with the engine assembly, so I began collecting the various parts. I have a container of bolts, nuts, and washers that obviously came from my car. Most of them have the correct “LOBO” stamping so I tried to find the right bolt for my particular job. All of them need to be cleaned of rust, and test fitted. Some of them are too rusty to use, so several bolts have to be collected until I can find a few that will work. What I thought would take a few minutes to install, took over an hour, but the brake booster, brake reservoir, and windshield washer bag are installed!