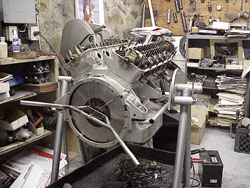 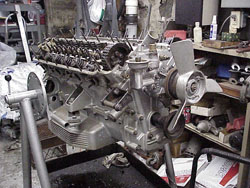 The Ferrari V-12 engine is the main reason why I bought one of these cars. When they run at full tick there’s a sound that makes my hair stand on end, but this thrill doesn’t come cheap. Ever since I bought my car in boxes nine months ago, I’ve been pricing Ferrari engine parts. It was my way of preparing for the worst so I wouldn’t be surprized when we found something wrong with the engine. Last week, Francois took my four liter motor over to his shop to start accessing its condition. When I got Francois’ phone call at work, I held my breath until he told me what he found.

The news was not all bad, but there are some issues that need to be tended to if I want to have my V-12 run like it was meant to be. The camshafts look good, and the valves all seem serviceable, but all the tappets will need to be replaced. They have not damaged the valve stems, but if they are not addressed now, more damage is inevitable. The main bearings have been replaced with standard bearing shells, but obviously have not been run. (more on this later). The main issue however is the tightness Francois found with the motor. While mounted on his engine stand, he found the motor very hard to turn by hand. His experience told him something is not assembled right, and the engine should be taken apart to find out. When I arrived at his shop to see the “patient,” all the sparkplugs, and rocker stands were removed, and the engine was still hard to turn by hand. It wasn’t seized, but you could feel the resistance in the bores. Francois is not willing to speculate, and will wait until he has a look at the internals. 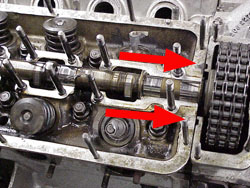 As Francois was inspecting the engine, he discovered a glaring error in the assembly of my motor. Someone had obviously taken certain parts of this engine apart, and replaced some pieces, but when this person put everything back together he forgot to replace a set of cam housing seals. According to Francois, if the motor was actually fired up without these seals, oil would have leaked all over the place! The last time this happened to Francois was on a Daytona motor at a race track. The cam seal failed, and the leaking oil caught fire after it dripped on the exhaust headers. Luckily we caught this error before spraying oil all over a freshly detailed engine compartment! After seeing this oversight, Francois feels that it will be best to completely disasemble the motor, considering who knows what else might have been missed.

The valve guides will also have to be replaced because the original copper alloy guides are still in place. With one set of springs removed, we can definitely feel the valves wiggling in their guides. This is a Ferrari weak point, and many smoking vintage V-12s are attributed to this problem. Francois showed me darkened intake runners that proved my engine was one of these smokers before it was parked. The oil burning from leaking past the guides was bad enough to deposit on the intakes!  I will definitely be adding bronze valve guides to my shopping list of engine parts. 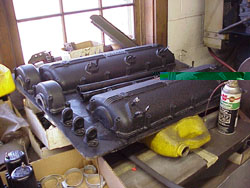 The engine detailing continues with all the parts that need wrinkle paint. It’s finally getting warm enough for the paint to work right. Here are the valve covers and associated parts getting a healthy coat of paint. 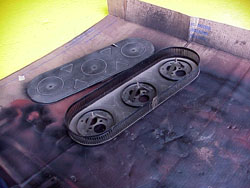 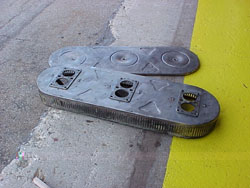 The air cleaner is the next project that will need detailing. The top and bottom pieces are supposed to be semi-gloss black, but the middle is nickle plated. The previous owner simply painted everything with wrinkle paint, which now needs to be removed. Out came the paint stripping tools and chemicals, but now I have the luxury of springtime ventilation! My lungs and brain are thankful!

The carburators are also getting rebuilt. Francois found one accelerator pump pretty badly seized. After a few days of soaking, it finally came loose. It seems that water even got into a carburator body and rusted some of the parts together! Is there anything on this car that did not get wet from all those years of storage?!?

It’s been a busy couple of days. I spent Friday at one of the largest automobile swap-meets on the East Coast, Spring Carlyle. I needed to take a break from working on the car to buy some restoration supplies. Carlyle, Pensylvania, however is not exactly a haven for Ferraris. Out of 8000 spaces, and hundreds of cars for sale, the only car that resembled a Ferrari was a Fiero clad in 308ish body panels. It was such a poorly done kit car that they didn’t even replace the Pontiac side view mirrors!

I picked up a bunch of tools, paint brushes, spray paint, and those tiny items that you know you’ll need someday if you buy it now. I also found a pretty good replacement for the large fresh air hose that runs from behind the headlight to the firewall. The Ferrari hose is a black fabric wire reinforced, and I found 54-62 Corvettes use a similar hose for fresh air. It has the same appearance, only it’s 4 inches I.D. as apposed to 100 mm for the Ferrari hose. If you do the conversion, the American hose is slightly larger, but very close. For 15 bucks a hose, it has to be cheaper than its metric counterpart! Unfortunately, I’m still looking for a good replacement for the other size hose which is 60 mm I.D., but each step gets me closer to completion!