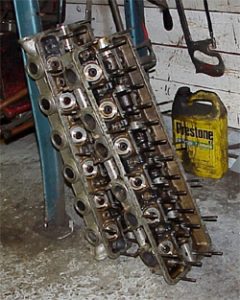 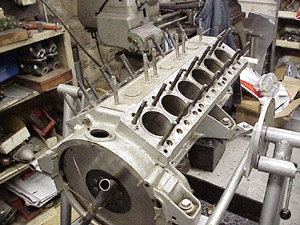 François made quick work of my engine disassembly. Just a week ago it was being lifted onto his engine stand. I can’t say that it’s he’s got time for my engine because when I stopped by the shop, he had two Daytonas, a 512BB, a 330 GTS, and a 330GTC in various states of repair. Every so often, I have to take a step back and realize how rare it is to see even one Ferrari in our regular lives, let alone four or five all in one place! 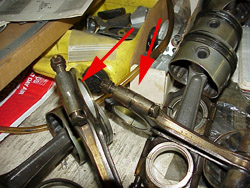 More interesting discoveries have been made on my engine’s tear down. The previous “mechanic” mixed up two pistons when the motor was put back together. Piston 6, and 9 were swapped, so the numbers were probably read wrong but it’s a sure sign of carelessness. Each rod and end cap is stamped with the cylinder number on the side of the “big end” (red arrows). Since you would normally read these numbers with the piston on the top, someone wasn’t paying too much attention when they were putting everything together!

This oversight caused most of the tightness found when trying to crank the motor by hand. The swapped rods were placed on the wrong side of the motor, thus binding the bearings that were designed to only go one way. Fellow Ferrari mechanic Bard Wolfe suggested flipped bearings as a culprit to my motor’s tightness, but doesn’t get the prize for getting the complete puzzle, but I would have to admit, who would have thought someone would have put the pistons in the wrong holes!

We also found all the compression rings out of tolerance. Some end gaps were too wide, and some were too narrow. We’ll have to see how many we will still be able to reuse when we put the engine back together. When Ed, Francois assistant, was cleaning out the camshaft, he found all the oil holes clogged with dirt. Luckily the cams are fine, but it wouldn’t have lasted long with no oil lubricating the bearing surfaces! 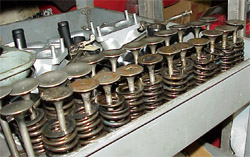 Ferrari engines of this era are basically race motors with different cams and compression, but they still require precise assembly. Carefully measuring everything, and making everything match is imperative to a good running engine because 7000 rpm doesn’t come with sloppiness! I hope whoever put this motor together the last time takes “Ferrari mechanic” off his business card! 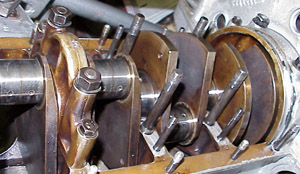 I’ve seen a bunch of V-12 motors apart in François’ shop, but I have to admit the perspective sure changes when it’s MY motor! Seeing all my parts laid out gave me a rare opportunity to admire some fine Italian engine building. The first time I saw a Ferrari engine on a bench, it all made sense why Ferrari won so many races with this design of V-12 in the sixties. Everything is built for durability and lightness. The main bearings that hold the crank are huge with four bolts securing each main. The distributors are housed in aluminum castings with bearings that keep everything in close tolerances. Almost everything is aluminum, and reinforced where need be. It’s simply a well thought out piece of machinery, not to mention beautiful!

I continued to clean parts to get them ready for paint, but I also started gathering the parts I’ll need to put the gas tank back in. The pick-up tube that feeds gas out of the tank was pretty corroded, so I started to clean off the oxidation. It’s made out of brass and is soldered onto a fitting that screws into the gas tank. As I sanded off the corrosion, and got the tube to a shiny brass color, I noticed something wrong when I took a closer look at the tube. 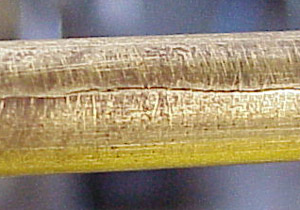 A small crack ran almost the whole length of the tube, and would have never been seen if I had not removed the oxidation. Overlooking this crack may have caused bad fuel delivery, and misdiagnosed as a bad fuel pump. Fuel delivery would have been fine as long as the crack was submerged in a full tank of gas, but as more of the crack became exposed, more air would get sucked into the fuel line, starving the engine of fuel. It’s better to fix this now than to chase an intermittent problem later!