I’m in between major projects with the Ferrari restoration, not to mention trying to juggle a full-time job and a personal life. With so many other things going on, it’s sometimes hard to remain focused on the love for this restoration! The engine is in the capable hands of François, and anything besides my paying of the bills will only get in the way of the engine rebuild. The upholstery is at the upholsterer’s and hopefully is working it’s way towards completion. The radio is still at work sitting in a box. I need to find some spare time so I can order some capacitors, and replace the old ones that have dried up.

The worst news comes with my grille. Rudi, the CBS machinist that was helping me rebuild my grille recently had a heart attack. His wife found him unconscious, and rushed him to the hospital. He was revived, but remains in a semi comatose state. We at CBS are all in shock of this news, and all hope the best for Rudi and his family. I am hopeful for Rudi’s recovery, and feel that with today’s medical technology, he is in good hands. I am really at a loss for words, and feel very empty without Rudi’s presence.

François tried to get me motivated into the next project today by having me test some of my electrical work. Although I connected 80% of the electrical components in my car, and tested the circuits with a continuity tester, I never connected a 12 volt battery to the system. Although I would have liked to have the engine installed and the gauges properly connected to the sending units before I tested the electricals, François feels it will be much easier to fix problems now without an engine in the way. 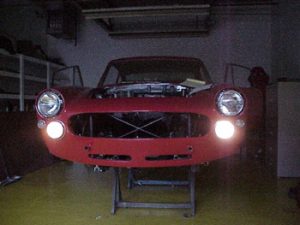 I took the battery out of my Sunbeam since it was the lightest battery I had, and began wiring up the Ferrari. To keep from frying my whole electrical system, I powered up one circuit at a time by only installing one fuse, and checking that particular system. One of the first circuits I tested were the instrument lights. I clicked over the rheostatic switch, and a orange glow radiated out from the dash. They worked, and even dimmed! I felt like I had just resurrected a sleeping giant! All these years my car lay asleep, and this was the first sign that it was coming back to life. The next circuit I tested was the headlights. They came on very brightly, proving all that work over the winter soldering those extra ground leads paid off! 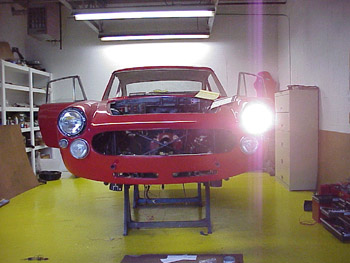 It wasn’t all good news however. The dreaded windshield wiper motor failed to move at all. I carefully wired the motor as best I could with the faded colored wires, so I’m not sure what my plan of attack will be. I’m not even sure if the motor even works. I’m going to spend a few more days scratching my head before I take that wiper motor out again!