Electrics and a Window Crank 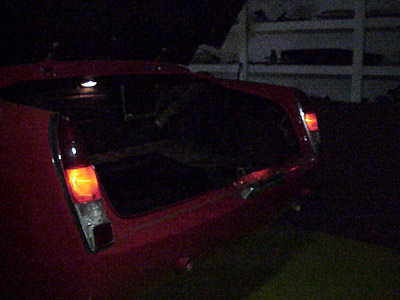 I spent some of my day checking more of my wiring. As you can see the rear marker lights, license plate lights, and interior trunk lights work! One bulb was burned out in the license plate fixture, so it will have to be taken apart, but I’ll need to disassemble it anyway because the housing needs to go out to be chrome plated. So far, most of my wiring is correct, but I found one minor problem when I tested the front marker lights. 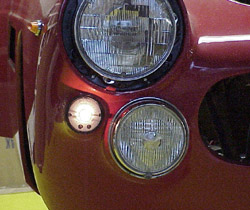 The lights that go behind the beehive shaped lens take an 1157 bulb that has two filaments, one for the marker light, and one for the turn signal. When I tested this circuit, one bulb burned much brighter than it’s twin on the other side of the car. At first I suspected a bad ground, and took a jumper lead directly from the negative side of the battery to the fixture. There was no change, so I continued to the next test. I exchanged bulbs to make sure it wasn’t simply a bad bulb; no change, onto the next step. I tested the actual bulb and found that one filament burns brighter than the other! Ah-ha! One must be dimmer for the marker light, and the second one is brighter for the turn indicator. I had the two bullet connectors flipped in the back of the fixture! Now everything burns with the same intensity!

Revisiting the wiper motor issue I reluctantly removed it from the car. Looking at the wiring diagram, and using “British Electrical” thinking because the wiper motor is a Lucas part, I figured out how the motor should work. If you’re wondering what I mean, you must have never worked with Lucas electrics! Owning a Sunbeam Alpine taught me a lot about these principals, but I won’t bore you all with these ridiculous details. Just understand that there is a good reason why British cars catch on fire so easily! 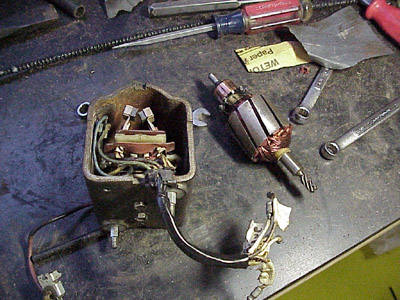 Anyway, my switch was wired correctly as far as I could tell, so my next suspect was a bad motor. I began unscrewing the motor housing, and it soon became evident that I found the problem. The motor shaft was rusted to the end bearings, and the commutator was also rusty. Now I’m no electric motor specialist, and have never had any luck rebuilding one, but I can certainly tell what will work and what won’t. 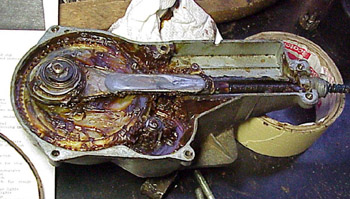 The next piece of bad news came when I inserted the motor shaft in the wiper transmission, and turned it, nothing moved. It felt like the gears that drive the windshield wiper cable were stripped. This double whammy is going to send me in search a new wiper motor assembly. I guess the good news is that it is a Lucas unit, and they certainly made more of these than Ferraris! I’m going to have to find a British car that used the same two speed motor. I took a peek under my Alpine, and it has the same shape wiper motor and transmission, but it’s only a single speed motor, or else I would have pulled it to test it in the Ferrari! 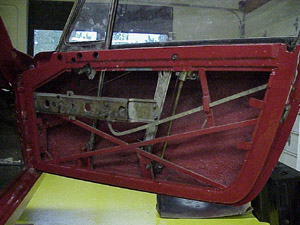 It seems the previous owner removed the window on the right door to paint it, but never really got it adjusted so the window would work again! The left door had not been removed because the original paint is still there, but it too had problems. I had some time to see what was the cause of all the binding. After winding the window up and down a bunch of times, turning all the adjusters, and taking up all the slack in the cables, I got the right window to move with pretty good ease. With a good lubrication, and a final adjustment, I think it will work pretty well. I expended enough knuckle skin, however, not to try and fix the left door. I’ll save that for the next rainy day, besides, the windows will have to come out anyway to install new channel felts. 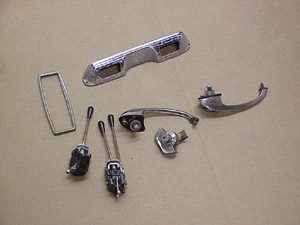 Before I left today, I started collecting all the parts I’m going to send out for chrome plating. As this project is coming along, I realize that it doesn’t make sense to save money on the chrome plating. Having freshly chromed door handles will only add the the shine of the new paint, and will only look worse if I don’t plate them. I’m going to spend a few days making sure I didn’t forget any pieces before I send it to the plater.

I want to thank all those who expressed concern over Rudi (CBS Machinist who was helping with my grille Fabrication). The latest news is that he is off the respirator and is responsive, but still not able to speak. He suffered a stroke, but he is making progress everyday.