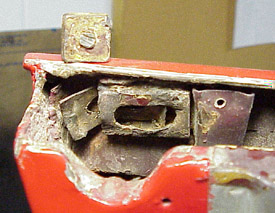 Last week I left a stubborn nut for another time. I got so frustrated with the rusty nut, that I felt myself getting ready to do bodily damage to the car, so I calmly put my hammer down, and went onto another project. Well this week, I walked into the garage with a tall cup of coffee, and fresh start to my day. I accessed the progress on the car, and began deciding what I wanted to do this week. Walking around the car, I was confronted with the little bugger, and decided I was going to win this battle today. After a strategically placing a punch, I managed to hammer out the cage nut out of its hiding place. I’ve finally learned that taking some time away from a stubborn problem is sometimes the best way to a solution! 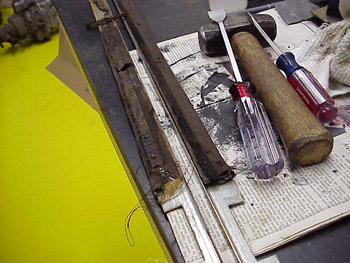 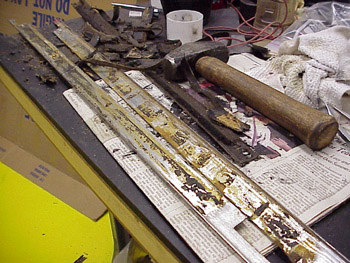 I scraped off the old felts on the window channels. They will be added to the pile of parts I’m sending to be chrome plated. The channels are made out of brass, so I had to be careful not to scratch them up too badly with my gasket scraper. The rubber backing of the window felt was glued in pretty well, so I also had to be careful in not putting my gasket scraper through my hand! 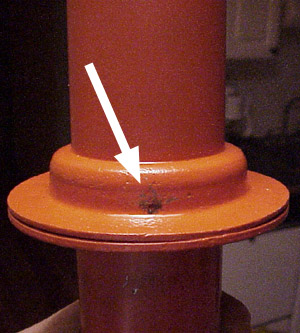 I stopped by François’ shop to assemble my rear shock assemblies. They consist of Koni shocks, springs, rubber bushings, and various spacers to keep everything together. As I unwrapped one of the rear shocks, I found an excessive amount of oil in the wrapping. Upon a closer look, François found that the shock was leaking from a small pinhole in the body of the shock. The hole was probably from a rust spot that was sandblasted open during the refurbishing. I’ll now have to return this shock to Koni for further work. Needless to say, I’m upset, but let’s hope the phone call I make on Monday goes O.K.! 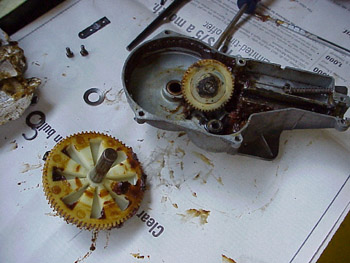 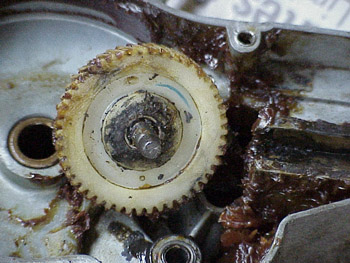 Not having much luck in locating a wiper motor from my British parts supplier, I decided to take a closer look at my wiper motor. Considering I can get rebuild parts for the motor itself, I decided to look into the gearbox mechanism to see if any irreparable damage had occurred. After removing a few c-clips, I had all the nylon gears out of the box, and soon it was clear to me one of the problems with my wiper motor. The main drive gear off the motor was seized in the housing. After some scraping, cleaning, and sanding, I was able to get the gear to turn. I also removed all the dried out hardened grease and replaced it with new waterproof grease. The motor shaft now operates the wiper assembly, so the next step is to see how I’m going to get my motor rebuilt. This part may be better left to an expert.

Francois stopped by to take a look at my progress, and showed me what I was doing wrong with my horns. They’re not bad after all! The trick was that the horn trumpets were not screwed in far enough for the diaphrams to vibrate against. Depending on how much air comes out of the compressor, you need to adjust the depth of the horn. I’M NEARLY DEAF FROM THIS PROCEEDURE! 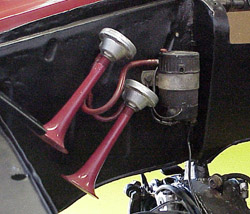 As excited as I was to see the lights shine on my car, I’m just as excited to hear the first sounds come out of my car, so here’s my first movie clip I shot of my car, and it is of the horns working! If you like this one, I may post more movies. (click on the picture)