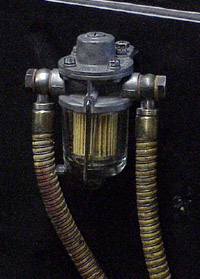 Continuing the engine compartment detailing, I installed this small fuel filter that mounts on the inner fender. It wasn’t as simple as it looks, because after searching in all the coffee cans filled with bolts from my car, I didn’t have the right ones for the brackets. As I mentioned before, Ferrari used bolts that have a “LOBO” insignia stamped on the head. Since the fuel filter is in a prominent spot of the engine compartment, this is a good place for accurate detailing. I stopped by François’ shop to see if he had some spare bolts. We found a couple of correct bolts, but they weren’t the right length, so I had to hacksaw them down to size. Are you beginning to see that it’s the small stuff that’s going to hold up this restoration?

The fuel hoses coming off the fuel filter and will be replaced when the engine is installed. I left them on the filter housing so I would remember which one was longer. 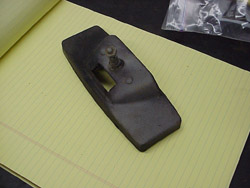 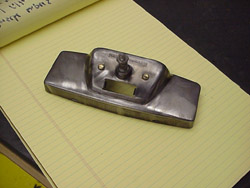 Speaking of small pieces, I stripped the paint off the rear view mirror for a new coat of wrinkle paint. The original wrinkle paint wasn’t in bad shape, but unfortunately it was covered with a light coat of primer. It seems that quite a few things were left uncovered when this car was painted, and because of it, I’m fixing the casualties. 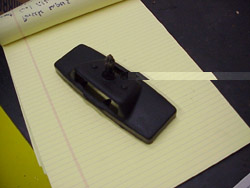 When I paint something that requires wrinkle paint, I don’t paint the metal with primer. Wrinkle paint doesn’t seem to work too well unless it’s sprayed directly onto bare metal. I’m also beginning to discover that not all wrinkle paints are the same. I bought a few cans of “Eastwood Co.” wrinkle paint, and I’m not really happy with it. Francis uses an imported wrinkle paint that’s made by “Wurth.” The imported paint gives a coarser texture, and wrinkles very thoroughly. The “Eastwood Co.” paint is hit or miss. It’s texture is finer, and sometimes doesn’t wrinkle in some spots. When I first started painting wrinkle finishes over the winter, I thought the problem was the lack of heat when I painted, but now that we are in June, heat is not a factor in getting the paint to wrinkle. The rear view mirror was painted with Eastwood’s paint, and was acceptable, but all the major wrinkle finishes (valve covers, fuse panel) will be done with the German stuff! 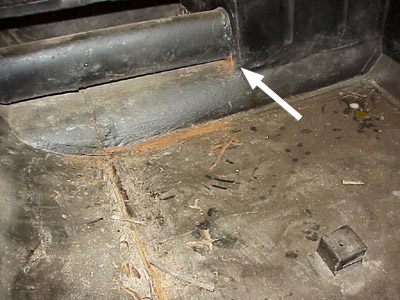 The trunk of my car is in pretty good shape. Most of the floor is solid, but I wanted to check the seams for any hidden rust that might be covered by the fresh paint. I started scraping the caulking that seals the seams of the trunk. The caulk was dry and came off pretty easily and underneath was surface rust that I’ll clean up and paint. Stopping this rust now will keep it from rusting through in the future. Trunk floors usually rust pretty badly because water collects there from condensation, leaky trunk lid seals, or rotted rear fenders wells. As the water sits under the damp carpeting, and a spare tire, the floor rusts out without anybody noticing. 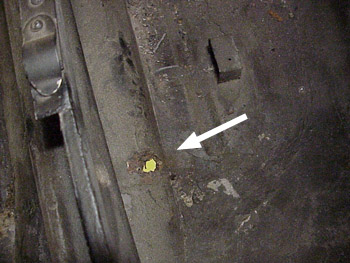 As I poked around with a screwdriver, I found two holes (arrows) that I’ll have to patch as well. The larger one will probably have to be welded in the future when I can drive the car to a welder. 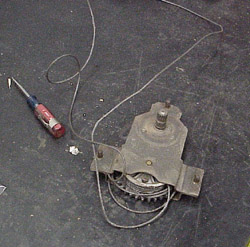 I took one of the window cranks out to try and untangle the cable. This cable raises and lowers the window in the channel. The right door shows evidence that it was disassembled when it was painted, while the left door remained intact, leaving the right window mechanism with all the problems. The cable has somehow become very twisted, and causes it to jump out of the pulleys when trying to crank the window. Since everything was apart, I decided to try and straighten things out, but many of the kinks won’t come out. I’m hoping that when everything goes back together, a good adjustment, and good tension on the cable keep everything together.

I got a pretty positive response from the movie I posted last week, and I’m glad you guys enjoyed it. I wanted to post another one this week, but I’m a firm believer in the adage, “Just because you can, doesn’t mean you should!” I will wait until I find a good subject to record in video before I post another one, besides, I’m sure you all would rather see the V-12 engine running, than me scraping rust!