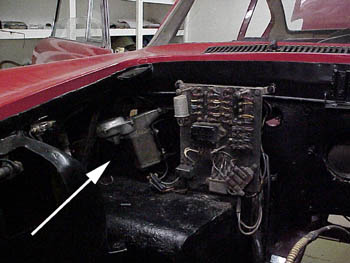 I finally got the wiper motor to work in the car! It took practically all day, but at the end of the day, I had the wiper shafts turning…sort of. It all started about Noon today after fixing the accelerator pedal on my Sunbeam Alpine (I’ve got to have something fun to drive while I work on the Ferrari!). I still hadn’t figured out how to get the motor to run in the car, and only one speed was working on the bench. I spent an hour trying to figure out how the motor got a second speed, but that only got me more frustrated with Lucas electrics!

I decided to check the washer circuit, and make sure that switch wasn’t fouling up the wiper motor. The washer pump  squirts washer fluid onto the windshield by foot pressure, but also has an electrical circuit that turns on the wipers for one swipe. The mechanical portion was working, but the electrical switch was not. I tried to take the switch apart, but couldn’t figure out how. Since I discovered this circuit does not affect the wiper motor, I decided to fix this problem another day. 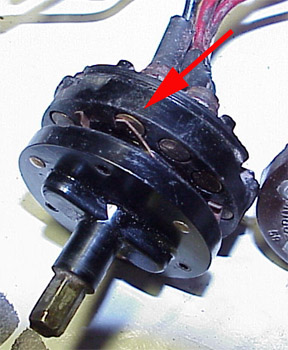 Returning to the wiper motor, I decided the only part of this system I did not look at was the switch itself. Once I pried the cover off, i realized my problem. Some of the blades that make contact to the various points were bent, and not touching! The brass contacts inside were also slightly oxidized, so I began sanding the contacts, and bending the blades. I excitedly reconnected the wires to the wiper motor, and turned the switch…Nothing! I jiggled the switch, and a spark popped inside, and the motor began to run! I soon had HI and LO speeds, and the motor even parked when I turned it off. I was very happy even though the switch wasn’t completely reliable. The oxidation and bent contacts would occasionally cause the wiper to stop working, but after some persuasion, it would work again.

It took another hour or so to mount the motor in the engine compartment, and feed the drive cable into the the wiper assembly. I wanted to make sure everything was well lubricated, before I installed the motor, because I was not planning on pulling this assembly out any time soon! Now I’m left with the switch. I want to spend some time and clean up the contacts real well, but it’s basically working, which is such a relief! 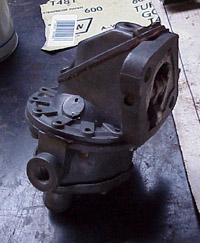 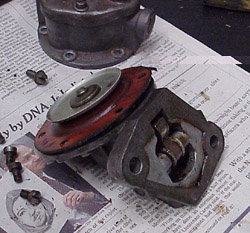 The mechanical fuel pump is the next project for rebuilding. François pushed against the pump lever and told me that the diaphragm was too hard and would need to be replaced. I took the pump over to my shop and began taking it apart. It looked pretty clean inside, but François was right, the pump diaphragm was rock hard. The flexibility of this membrane is what moves the fuel through the pump body and up to the carburetors. I’m told that complete rebuild kits are available, and most Ferrari V-12 use the same pump. I’ll put my order in next week! 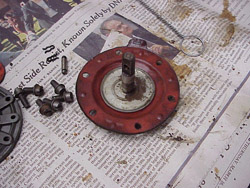