I got the molds back from Seaport Mold in the mail the other day. Mike sent them back because he felt that they were unusable for making a quality cast. Since I had some time at work, I decided to try and give it a shot at making a cast from these molds. I had two molds made from the 330 America badge in California, one of them being better than the other, so I decided to experiment with the worse of the two. 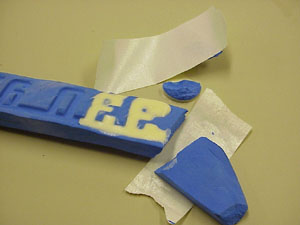 Well, our fears were right. The epoxy managed to fuse very well to the mold material. The chemical compounds must be very similar to fuse together so well. The next test was to use some kind of release agent.

Release agents keep two materials from sticking when making a cast, and can be a number of substances depending on what you’re casting. You want to keep the agent as thin as possible so the details of the original cast won’t be harmed. The first release agent we chose was spray shellac.

I sprayed a few thin layers on the mold and waited for it to soak into the mold, and dry. The more epoxy was poured. No luck, the epoxy fused to the shellac and the mold as if there was no release agent at all. The next choice was latex.

A thin layer of latex was brushed on another pair of letters, and casting material was poured. This time, the cast released, but not too cleanly. Still not satisfied with our results, Barbara and I decided to try a final alternative of using latex and spray lubricant (PAM) as our release agent, and casting the remaining mold in plaster. After much work building a “dam” to contain the plaster, we found the plaster to work best at making a cast from these molds, but a lot of work will be required to clean these casts before a good badge will come of it.

After all this work, I think I’m going to abandon the idea of obtaining a good cast from these molds. The material is just too porous to work with. Let’s hope Seaport Mold has better luck going with the flat art I created of this badge from the photographs.