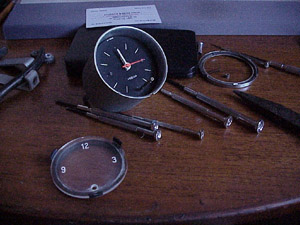 There was some talk on an internet mailing list about clocks, so I decided to take my clock home and try to find out what was broken. Like most automotive clocks from this era, they stopped working after a few years. As I pried the case apart, I couldn’t readily see what was wrong. The decision I need to make is whether to fix the mechanics of the old clock, or replace the mechanism with a modern quartz movement. Some of you are hoping that I perish the thought of replacing the Veglia guts with modern internals, but after reading an article written recently about replacing the old movements in automotive clocks, I can see their point. Once the old movements are fixed they will eventually stop working again because of their faulty design. Dirt, vibration, and wide temperature changes all work against mechanical movements, all of which are abundant in an automobile. Admittedly, the tick-tick-tick of the quartz movement will give away the internal swap, compared to the smooth sweep of the old movements, but having a broken clock may be just as bad! Any opinions?