I got the flex hoses from Parts Source for the brakes. They were the cheapest items on my invoice. (I’ll tell you about the expensive stuff later) We checked all of the old flex hoses and every one was clogged, but even if I found one to be still good, I don’t think I would have taken a chance at not replacing them. The rear line had to be slightly modified to work, but François helped me use his lathe to mill the end to the correct shape and length. 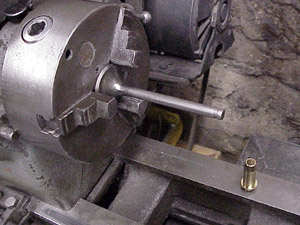 Speaking of lathes, François began teaching me how to use his lathe. It’s a piece of machinery I never really saw or used until a year ago. In modern times, not many people have a need for this machine because everything is purchased ready-made from the store, but I soon realized how many things can be made, and modified much cheaper on a lathe, than buying it at a store. After we modified my brake line, François began showing me how we were going to fine tune the fit of my valves with the new valve guides. I assured him I was competent enough not to screw up my valves. He looked over his reading glasses, and simply said, “You fuck eet up, you going buy new valves!”

The new bronze guides will be chilled, and the aluminum head will be heated in the oven. Before each part returns to room temperature, the guide is hammered into the head. The clearances are reamed out to match the valve, and the valve seat is cut once the new guide is in place. My valves seem to all be within specifications, but some of the valves have a slight ridge in them from the previous guides. These ridges need to be removed, so they won’t keep the new guide from sealing. The valve is put into the jaws of the lathe, and spun. Fine emery cloth is used cut the excess metal, but care is taken not to remove too much. I carefully checked each valve, and assigned each one with its own valve guide. Francis showed me how the valve should “feel” as you tried to wiggle the guide. I don’t think shop manuals explain how valves should “feel?” 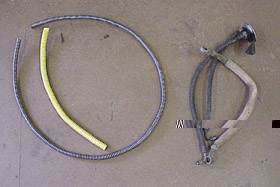 Thankfully I didn’t ruin any valves, so I’m keeping the engine overhaul on budget, but that can’t be said for some of the hoses. Francois has warned me of the prices of the soft hoses, and tried to give me some the the used hoses he’s collected over the years. They’re not up to concours level, but perfectly fine in passing fluid. The oil lines, and one fuel line Francis did not have, so I had to order them from Partsource. I’m not going to tell you the total price for all these hoses, because it’s embarrassing, but if you want an idea, these hoses sell between $3.90 and $4.25 an INCH! 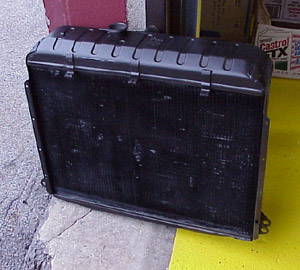 I finished the radiator today by spraying on a light coat of paint. I didn’t want to cover it with too much paint so that it would affect it’s cooling properties, but I spayed just enough so it looked black. I also took some time to straighten some of the cooling fins with a pair of needle nose pliers. I figured every little bit of thermal efficiency would help keep my Ferrari cool, so might as well do it now while the radiator was out of the car. At the end of the day, I completed another sub-assembly!