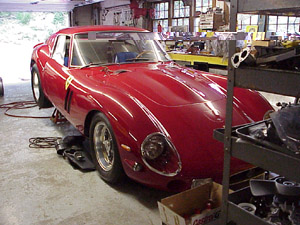 While I was at François’ shop yesterday, I was graced with the presence of another great car. Actually, in Ferrari circles, it’s considered THE CAR. It was a ’62 Ferrari GTO. One of only 39 made, and here it was sitting in François’ shop. I was in awe, but I also had mixed emotions about this automobile. Was I impressed because it was one of the most expensive cars in the world, or was I impressed with it’s shear beauty? I wasn’t sure. It was BEAUTIFUL! Not as feminine, like a 250 SWB, but sexy with an air of fury! You could sense the purpose of racing under its sensuous curves. No one could accuse this car of being cute. 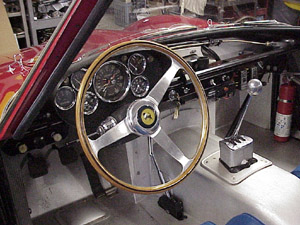 This was my first chance to see one of these cars up close. As I told Francis, “I’ve only seen these cars from the other side of the velvet ropes!” It wasn’t an overly complicated car. In fact, compared to a 275GTB, it was primitive, but it represents the first car to do everything well. It was fast, reliable, and beautiful. Ferrari created the first masterpiece, and all others would only be second. 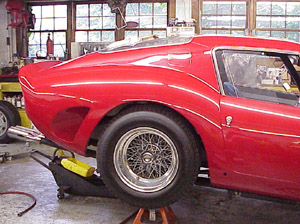 Having François work on this car was evidence that this car was still seeing regular road use. I don’t know if I would have the guts to drive a $5 million dollar car on public roads, but I am happy to see someone is! It’s a shame that most of these cars are in private collections where we only get to see them at shows or museums. I can just imagine what it must be like to be passed by this car on a two-lane road with it’s engine at full scream! That’s the Ferrari impression I want to remember.