Before the gas tank is installed back in the car, a few minor details need to be sorted out. There are four washers that need to be made that will insulate the tank from it’s mounting points on the car. Originally these insulators were made out of a hard rubber or bakelite material that disintegrated through the years. When I took my tank out, my insulators crumbled away in my hands, but François managed to salvage a whole one from a 275 GTB he is currently restoring. He usually replaces these with Teflon cut on his lathe. It’s pretty amazing stuff, and is perfect for this application.

Looking at his supply we found that he’s out of the smaller bars that he cuts to make these washer sized bushings, but I told him I would look for some in NYC. He warned me that it wasn’t cheap stuff, and if I couldn’t find any, he would go to a industrial salvage place down in in Stanford.

On Canal Street in NYC there are a lines of stores on the west side that sell almost everything. There’s a place called Canal Plastic, Canal Rubber, Canal Electric, and a slew of others selling motors, fans, steel, and who knows what. It could be a post apocalyptic trading post where salvaged goods are traded to build whatever you need. Picking through the bins spread out on the street I found scrapped aluminum bars, huge steel dolly wheels, miscellaneous switches that look like they could turn on a power plant, and many other cool things. Artist flock to this street to create inspired artwork, and car restorers, like me, come looking for teflon. 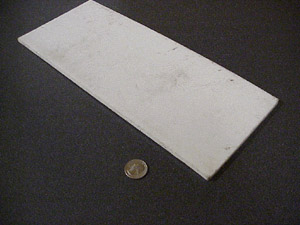 Canal Plastic, and all the other plastic retailers didn’t have the stuff, but when I walked down the street to the more shady salvage stores, I found what I needed. Although they didn’t have teflon bars, they had a couple of small sheets of the stuff. I pulled one out of a bin and negotiated a price. As a New Yorker, we are taught at a very young age two things when buying things off the street, first, never pay retail, and second, offer half of their first offer.

The sheet I bought measured 6″x14″, and is about 3/8 inches thick. I’ll bring this piece to work, and use their hole saw to cut the washers the size I’ll need. If any trimming is needed, I’ll bolt all bushings together on a bolt, and cut them down on a lathe. With this sheet of teflon, François and I should be able to make enough for 10 Ferraris!