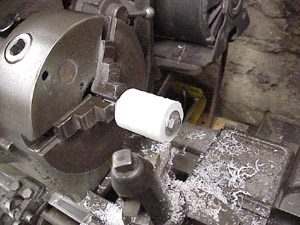 My first stop of the day was at François’ shop to clean up the teflon bushings I made at work this week. François’ lathe would do a nice job trimming them down to 30 mm like the originals. François also managed to salvage an original bushing that was still intact, so I could make sure the diameter, and center hole were large enough.

I tightly screwed a stack of bushings together with a bolt and mounted it in the lathe. François cut the first set to show me how to control the lathe to take small amounts of material off the bushings. As he handed over the controls, he checked to see if I had any loose clothes that could get get caught in the lathe and do me bodily harm, and handed me a pair of goggles. 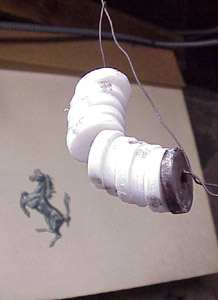 I cut two sets, one for my car, and another set for a car François is currently working on. I’ve got enough teflon left for two more sets, so I left the extra at François’ since he will probably be needing more of this Teflon before my next restoration project!

Back at my shop, I began to assemble the things I would need before installing the gas tank. I realized that the speaker enclosure would need to be pop riveted in place before the gas tank is installed. I plugged the radio in to make sure I had continuity with all the speaker leads before permanently installing the components. Everything worked fine, and sounded great, so I finished the speaker installation. Next was getting the gas tank up to the level of the car. As you’ve seen, my car is up pretty high on those jack stands, so getting the gas tank was quite a balancing act.* I found that resting the gas tank on a milk crate that was then supported on my floor jack got it high enough to get the bolts started. Sorry there’s no picture, but you can imagine the contortions I was making with my legs, arms, and neck squeezing under the rear differential, bracing the tank while trying to slide the bushings in place, and start the nuts on the bolts! 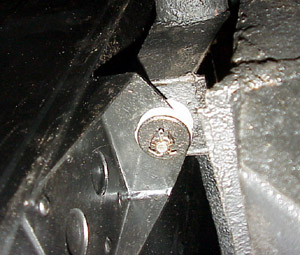 I went into my toolbox and fished out the special tool I made almost a year ago to take these gas tank bolts out, and quickly got everything tightened down. With the cotter pins in place on all four mounting bolts, everything looked great!

* Having the car up that high has it’s reasons, one being it’s the only way to get the gas tank out in the first place! This gas tank is vertical tank, so if normal jack stands would not have been high enough to slide it out from under the car.