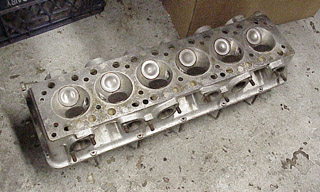 I stopped by François shop today before heading up to mine to see how he was making out on my engine. We both were out of town for a few of days on alternating weeks, so we had not seen each other for a few weeks. The first thing I saw were both heads fitted with new valve guides. The old valves were fitted in place, and now are ready to be mounted back on the engine block. 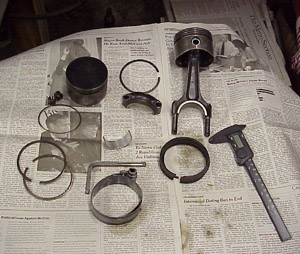 François had discovered another problem with my engine, and had the first cylinder laid out ready to show me. As he was fitting the piston, he was surprised to find it fit too tightly in its bore when all the rings were in place. The tolerances measured correctly on the end gaps, but still the piston felt too tight. After some head scratching, François discovered the problem. Ferrari had changed the design of their oil spreader ring between the 250 and 330 series engines. The old design used a one piece ring while the 330 engines used a two piece ring/spring assembly to help spread the oil in the cylinder bores. The previous engine builder purchased the 330 two piece rings for the rebuild, but did not realize the pistons on my engine were machined for the older one piece design. Exactly which 330 engines received the new two piece design, François is not sure, but considering the 330 America was one of the first cars with the “new” 330 motors, it’s understandable that it is still using the older design.Trying fit the two piece oil spreader ring in piston designed for a one piece caused the piston to bind in the bore, thus another reason for a motor being too tight. The solution will be to send my pistons out to be machined for the new oil control ring. Luckily, Francois had a set of pistons from a 330 GTC to get the correct depth of the new oil control ring. I think the oil control groove needs to machined another .37 mm for the new rings to fit.