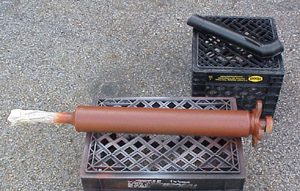 Along with watching François assemble my engine, I continued to work on the miscellaneous parts that need cleaning, or painting, or both. It was a perfect day for painting. Humidity was low, sunny and in the 80s. I started painting the drive shaft after getting most of the rust off. I used “”Eastwood’s Corrolless.” rust stabilizing primer to try and keep the shaft from rusting anymore. It will then be painted black like the gas filler neck seen in the background. 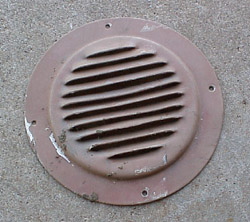 While I was waiting for the various coats of paint to dry, I found another part on the shelves that would need painting. Although the interior is at the upholstery shop, a vent plate that is painted the same color as the interior color will need to be stripped to be repainted. I first tried to strip the paint with the wire wheel, but the paint was too soft, and began melting from the heat of the wire wheel. I decided to chemically strip the paint first to loosen the paint, and work form there. The gooey paint was removed with the stripper, so I could wire wheel the rest of the paint off. 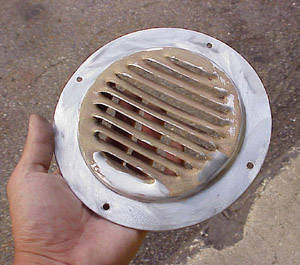 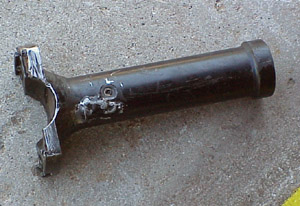 As the drive shaft was being painted, I stripped the back yoke that connects to rear u-joint. As the years of grease and was removed, I found a couple of problems that gave me some clues to the history of this car. If you remember, I suspected the rear u-joint had failed at some point in the this car’s history from the evidence of dents in the drive shaft tunnel by the u-joint assembly. A u-joint is installed on the rear differential, so I assumed it was something that was repaired. Now I’m not so sure. The drive shaft yoke that bolts to the u-joint shows nicks in the steel that would support the broken u-joint theory, but these nicks would not have allowed the yoke to be bolted back to the new u-joint without first filing the bent metal off. What probably happened was the u-joint broke, a new one was installed, but the rest of the car was apart going into restoration, and next thing you know, 25 years passes and I now own the car! 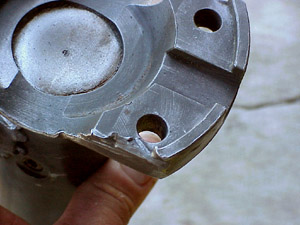 Anyway, enough of the sleuthing, I filed the yoke down and fitted the u-joint pieces. If you look carefully at this picture, and the one above it, you can see a grease fitting in the middle of the shaft. The brass grease fitting had been snapped off (probably during the u-joint failure) and needed to be extracted. François made easy work of this with a stud extractor, and replaced it with a modern zerk fitting. I’ve decided to replace all my grease fittings with zerk fittings because greasing the many fittings will be far easier without having to use an adapter. If I ever decide to compete in a Ferrari show, replacing all these fittings with “period correct” fittings shouldn’t be that difficult. 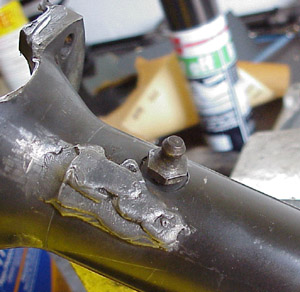 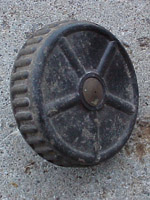 A whole lot of my day involves getting things ready for future projects. As I see one project coming to a close, I need to begin another one to keep the pace up. It’s very similar to building a house. There’s a specific order things need to get done, but keeping the momentum in the project is very important. Painting the gas filler neck reminds me I have to clean and polish the gas cap. It looks like Bakelite, a fifties version of plastic, but François says I can polish this piece just like regular plastic. I’ve cleaned it up the best that I can, and will try polishing it next week. 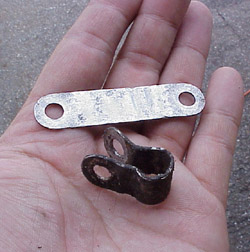 Another project I’m trying to start is to fabricate aluminum clamps for the brake and fuel lines. These aluminum clips are pretty simple pieces that I’m sure I can make at the CBS Construction Shop, so I’ll probably be stopping by there in the next week or two. Speaking of which, Rudi is doing well, and I think he is still making plans on returning to work! He really loves to work, but I’m going to check up on him to see if his wife convince him otherwise!