The Front End, The Rear End, and Underneath 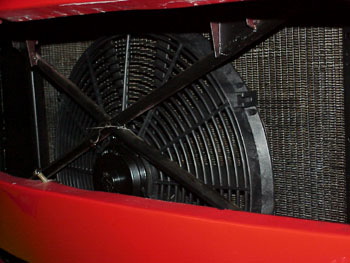 On the front end of the car, I mounted the electric fan I purchased from Summit Racing. It’s a 16″ Low Profile fan made by Flex-a-lite that would fit between the cross brace, and the radiator. Even with all the measuring I did, there was still some doubt with the clearance. As you can see the motor clears only by offsetting it to the cross brace. I supported the fan in place with some bailing wire to check the clearance. The fan came with plastic mounting ties that thread through the core of the radiator which I feel looks horrible. I’m sure it works fine for a daily beater car, but certainly not for a Ferrari! Now that everything is roughly in place I’ll take some measurements and fabricate some nice mounting brackets.

This fan can be installed as a “pusher” or a “puller” meaning the direction of the airflow. My setup is for a “pusher” because it’s mounted on the front of the radiator. The plan is to keep the alloy fan mounted on the engine pulley, so everything looks stock, but the electric fan will be hidden from view on the other side to aid in cooling when I’m in traffic. The thermostatic switch that operates the alloy fan will also operate the electric fan, so I won’t have to be bothered with switching on the fan.  Along with not having to think about this fan, I won’t see it very well either because it will be well hidden by the grill! 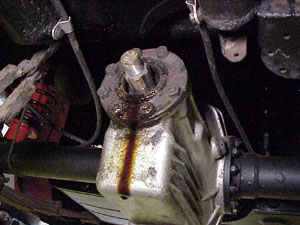 On the rear end of the car, I pulled the retainer plate that holds the hub seal for the differential. As you can see from the oil trail, the seal was bad. François brought his impact gun over to break loose the castleated nut, and the rest was up to me. Once I get a new seal, I won’t have to dodge the puddle of gear oil under the rear diff anymore! 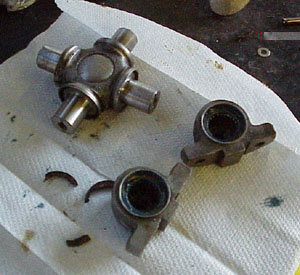 The rear U-joint needed cleaning and re-packing, so I got to work on it. I’m going to have to fabricate new cork seals. The old ones, or what’s left of them, can be seen in pieces. All the drive line components are slowly coming together, and soon I’ll have nothing left to do but drive the car! O.K., I know, there’s still a TON of work to be done, but I can dream can’t I? 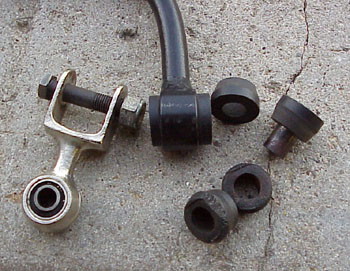 Underneath the car, I worked on the suspension bushings. As I promised, I spent a part of my day cutting the new polyurethane bushings down to size so they would fit on my sway bar. Without closer inspection, they look like ordinary rubber bushings, but these polyurethane bushings should last far longer than the original rubber ones. The old, dried out, and distorted rubber ones can be seen on the bottom of the picture.