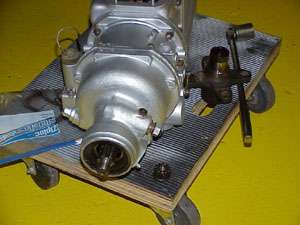 I borrowed Francois’ impact gun, and took off the nut to the rear of the transmission. It’s the last seal that needs to be checked and probably be replaced. Even with the nut off and a couple of light hammer blows, the hub wouldn’t budge. After giving it some thought, I decided to try using a steering wheel puller to coax the hub off. With some light pressure from the puller, and light tapping from a hammer, the hub slowly released. Now all I have to do is borrow a snap ring plier to get to the seal! Hopefully, one more week, and this will be done! 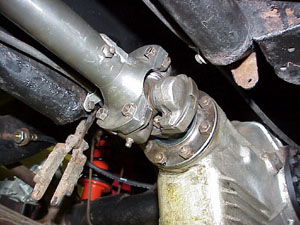 I also used the impact gun to install the rear driveshaft yoke into the differential. (The blue stuff you see at the base of the flange is not RTV, but a light coat of grease to lubricate the hub seal.) After that, I bolted on the u-joint, and its connecting yoke. I’ll safety wire the u-joints later. The next step involved putting together the rubber dougnut and attaching it to the driveshaft. 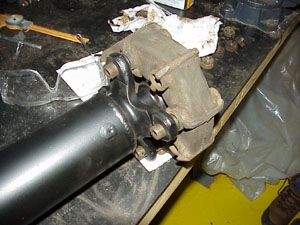 The picture I took of the rubber dougnut makes it look really old, but it seems to be in pretty good shape.

Once the four bolts were in place I remembered that Francois also gave me some cotter pins to secure the castle nuts. Normally, I would have bent the cotter pins in any old way, but after hanging around Francois’ shop and seeing the attention to detail he gives to all of his work, I called him for guidance.

Francois trained at the Ferrari factory in the sixties, and picked up all the special techniques specified for these cars. Some of these techniques are no better than another method, but it sure makes detailing a Ferrari much more accurate. 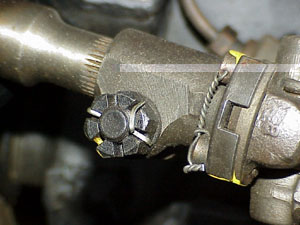 Francois showed me a steering column nut as an example for the correct cotter pin installation. Never in my amature mechanic’s mind would I have imagined bending them like this, but Francois assured me that was the way they did it at the factory. 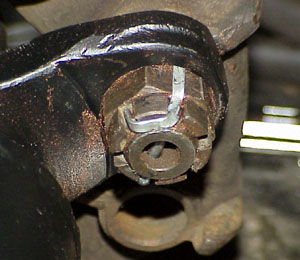