A fellow restorer offered a tech article he wrote replacing the bushing that helps take the slop out of the transmission shifter. Looking back at my pictures of my shifter, I definitely had the older caramel colored bushings, evidenced from the ground up powder left inside my shifter!

Although my shifter is an earlier unit commonly fitted to the 250 series transmissions, the ball mechanisms are basically the same. 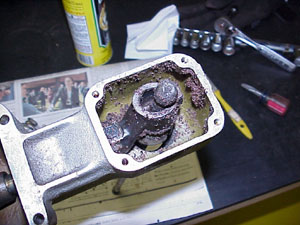 Thanks Kerry for the article!

Replacing the shift lever bushing in a 5 speed 330 GT

You will know that the bushing (part 23 below) needs replacing if there is lots of slop in the shift lever. It feels like it�s in neutral even when it�s in a gear.There are two types of bushings. The original caramel colored ones are prone to failure.The later ones are black and have a split down one side.They are made of harder material and will last longer.Try to get one of these if possible.

1. Remove the console.You should make note of where the various wires are attached as there are several for the power windows.
2. Remove the transmission tunnel cover. You may also have to remove some of the carpeting.

3.Remove the gear shift knob (1) and jam nut (2).
4. Remove the passenger seat.
5. Remove the transmission tunnel. This may require loosening of the parking brake housing to allow withdraw of the tunnel. Note, there are 4 bolts holding the tunnel to the fire wall, 2 or 3 along each side and 2 studs with nuts at the rear sides of the tunnel. You�ll probably find that some are missing or not holding anything as they screw into captured nuts that are pop riveted to the firewall or floorboard which come loose or break. You might want to have some long 3/16� pop rivets available if needed.
6. Remove the housing nuts (10) and lock washers (11) holding the rear housing cover (20) to the transmission.
7. Carefully remove the rear housing cover with the transmission in neutral, paying attention to separating the gasket (21) cleanly if you are going to reuse it.
8. Remove the spring ring (not shown) at the bottom of the actuator (22). This is not easy, but a large nail ground to fit into the small slot in the actuator works.
9. Remove the C-ring (4) that�s on top of the spring.
10. If the old bushing (23) is still intact around the shift lever, split and remove it. If not, the parts are somewhere in the transmission.
11. Push the shift lever down and through the actuator.
12. Pop on the new bushing (23) onto the end of the shift lever.
13. Pull the shift lever back through the actuator with the new bushing attached.
14. Replace the C-Ring (4).
15. Replace the spring ring at the bottom of the actuator.
16.Clean the mating surfaces on the cover and transmission and the gasket if you are reusing it. Also use some silicone gasket cement or form-a-gasket on both sides of the used gasket prior to re-assembly.
17. Replace the rear housing cover, carefully aligning the knob of the actuator into the slot made by the shift forks.
18. Replace the nuts and washers on the cover, torqued to 5 ft. lb.
19. Check the transmission oil level (large nut near the parking brake) as one can�t do this from below. The level should be ½� down from the opening.
20. Replace the transmission tunnel. Note, the tunnel fits tight against the firewall, so any sound proofing material needs to be pushed aside. Also be careful to not poke a hole in the shift lever rubber boot.
21. Tighten the parking brake housing if needed.
22. Replace the passenger seat.
23. Replace the gear shift knob and jam nut.
24. Replace the transmission tunnel cover and any carpeting that was removed.
25. Replace the console.