A few weeks ago I was out helping Yale pick up his new 330GT 2+2 fresh in from Holland. We found the oil filter had come off, so we couldn’t drive it home. It turned out that the oil pressure regulator had gotten stuck and allowed full pressure from the oil pump to the oil filter, exploding it in the process! Yale got a shop to fix the offending regulator, and today, we went to pick up the car. 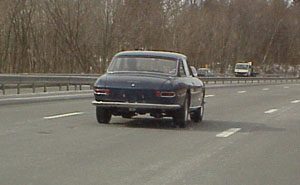 It’s been snowing and raining for the past several weeks, but today, it was sunny, and relatively dry. We chose this window of opportunity to get the car to François to give it an overall inspection, and repair all the little things that this car needed. Leaving Wide World of Cars in Spring Valley, NY, I followed Yale in another car to watch the Ferrari from behind. After cruising on the highway for a short bit, Yale pulled over to get some gas so we could make it to François’ shop.

As Yale was filling up the gas tank, I cautiously watched for leaks (remember the 308 story?). Walking around the car, Yale and I began making a mental checklist of things to have done on the car. $30 some odd bucks of 94 octane later, we got ready to leave. Just as I was about to pull out to follow the Ferrari out, Yale was knocking at my window. “Shut the car off! We’ve got a problem!” Yale yelled. What could it be now?

As I walked towards the car, I saw fluid leaking out from under the car. At first I thought it was gas, but I made sure we weren’t leaking it earlier. As I reached the car, I saw it was coming from the front of the car, so the next thing that passed through my mind was the oil filter blew again, but looking at the fluid, I saw it was water, so it had to be coolant. I was slightly relieved because it couldn’t be that bad if it were coolant. Popping the hood revealed a fine spray of coolant out of the radiator’s top seam. The pressure of the warm coolant must have worked its way past a weak solder joint. Yale called AAA.

We waited close to an hour for a flatbed. In that time I managed to get a picture of Yale next to his car. It’s not the most flattering picture of the car with the hood up, but if a picture could tell a story…I tried to keep Yale’s spirits up about how this “just happens” and as all the little things get fixed, he’ll have a nice car. Hopefully the next time you see a picture of Yale and his car, it’ll be of him behind the wheel, with grin from ear to ear!

We made it to François’ without incident, and completed the next step in getting the car ready for springtime cruising.