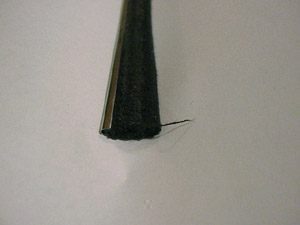 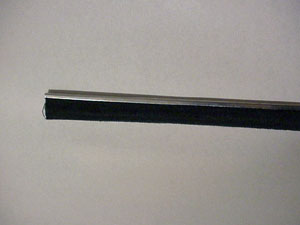 So the order comes in from Re-Originals for the “correct” window felts with the stainless steel edging, and it still doesn’t seem right!!! The felt material is thin, and the stainless steel edge is simply crimped onto one side of the felt. Last week I was so frustrated with trying to order this stuff, I was tempted to install whatever came in the mail, but not when it looked like this! I called Re-Originals, and told him how I felt, but Matt said that this was the right stuff manufactured in Italy. Thankfully, he would take it back if I wasn’t satisfied because it cost $58.00 for this stuff! 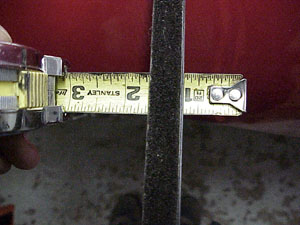 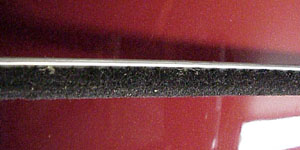 When I was at François’ shop, I took another look at what felt he had left in stock, and I can clearly see a better product. The felts (with the red background) show a much plusher felt, and the stainless steel edge is part of the whole felt. When you look at the Re-Original felt (white Background), the stainless steel edge is crimped to the felt on one side, and is actually uneven with the felt in some places. One snag, and I can see this stainless steel strip pulling off, but this could never happen with the better felt.

After speaking to Re-Originals, I called Geoff Ohland at Partsource, and he reaffirmed what François had told me. Jeff only had the felts without the stainless steel edging, and a new supplier has been hard to find.

I called another supplier located in Pennsylvania that has a nice catalog of restoration parts to see if they could help. I explained my difficulty in finding the right felts with the level of quality I wanted, and he asked what I was restoring. After he heard “Ferrari” he honestly said that he didn’t feel that the thickness of the felt that he carried would be heavy enough to match the stuff that originally came off the car. His advice would be to try a European supplier, but didn’t really have any sources. I thanked him for his time and continued my search.

François is going to try to locate the supplier for the felt he has. It hasn’t been easy because he had ordered this stuff so long ago, but it has come time to re-stock. With the both of us looking, eventually we’ll find the right stuff.