Windows, Doors, and back to the Transmission 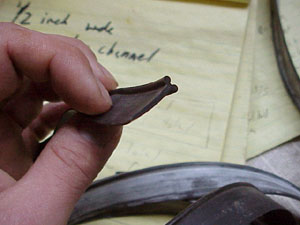 I started the day installing some weather stripping in the door of the Ferrari…actually, I started my day getting stuck in the snow in François’ driveway, and had to be pulled out! (light front-wheel drive cars without snow tires don’t do well in steeply sloping driveways!) In New York City there wasn’t a bit of snow to be found during my wet drive north, but by the time I got to Connecticut, four to five inches of snow had fallen, and it was still coming down hard. At this point, I’m pretty tired of the snow, and can’t wait for Spring! 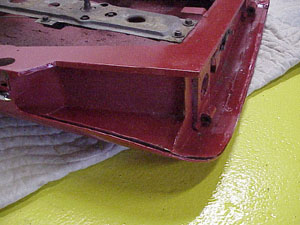 Anyway, after I managed to get to my shop, I started installing the weather strip. This piece was the reason for removing the doors, and can only be installed with the door off. A lot of WD-40 is used to grease the channel for the rubber to slide into, and the work is slow going. Care also had to be taken not to chip the paint on the door edge as I used a screwdriver to help the rubber strip into its place. 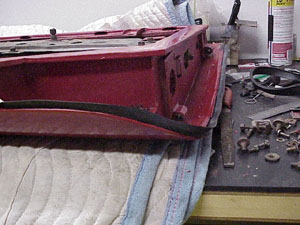 One door had it’s original metal strip in place, so the rubber slipped into place, but the second door had the strip replaced, probably because the original rusted away. The profile of the replacement strip did not allow the rubber stripping to slid in as did the other one, so I had to push it in place a quarter inch at a time. 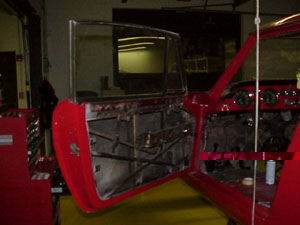 With the rubber strip in place, I could begin reinstalling the doors. First the hinge pins need to be well greased, then the door edge was taped to prevent paint chips. After I hung the door, I began putting the window, and window frame back in. (Doing this after the door was hung saved me the trouble of having to lift all the weight of this while trying to hang the door.) The next step was aligning the window frame, and working on the window crank mechanism. There are many adjustments to get the window to work and fit properly, and it took a while to get everything to close, and fit properly. It took so long that I’ll have to save the right door for next week. 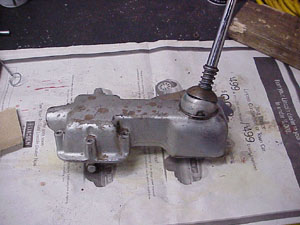 A few weeks ago  I assembled the shifter mechanism, and attached it to the transmission. I tried working the shifter through the gears and found the transmission wouldn’t go into first gear. I made a mental note of it and moved on with other business. Last week, while I had some time, I decided try and find out what was wrong with the shifter. Everything seemed to be in working order, and I even checked the owners manual to make sure I was following the right shift pattern. After no satisfaction, I took off the cover plate to the gear section of the transmission, and couldn’t readily see anything wrong. I mentioned my problem to François, and he said that he would take a look at it the next time he stopped by. 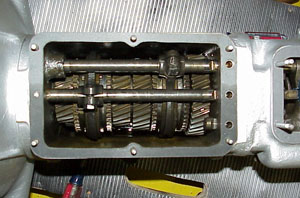 After a few minutes of looking around today, François found the problem. A piece of the 1st gear synchronizer mechanism has lodged underneath the syncro! This was bad news for us because it meant the whole transmission would need to be taken apart to get to this portion of the gears. François was very surprised this happened because in all his years he may have seen this one other time. He says that Ferrari transmissions are pretty sturdy pieces, and rarely fail, unless they’re man handled. This development sheds more light on what may have happened in this car’s life over twenty five years ago. I was told that this car was taken off the road because it needed a new clutch, but evidence shows that much more was wrong years ago. 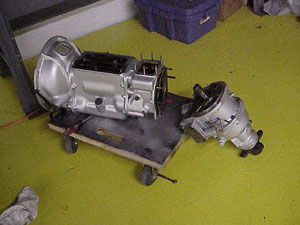 So now begins the process of disassembling the transmission. I CAN’T BELIEVE I’M STILL TAKING THINGS APART!! Sorry for that outburst…The overdrive portion slides off, and the bell housing will come off so a smaller package can be transported to François’ shop. Despite my concerns, he feels pretty confident in fixing my problem, and feels it will take at most five hours to strip and reassemble the transmission. Let’s hope for good news.