I went to an industrial sheet metal supply company to buy some sheets of aluminum to make my exhaust shields today. They had remnants of larger orders that I could buy, so I found some in the right gauge, and asked if this stuff would be the right stuff for these shields. The salesman assured me this stuff was soft enough to form what I needed. (can you see where this is going?) 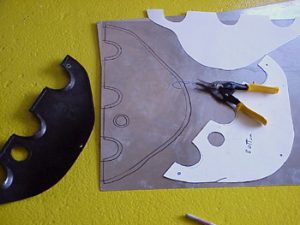 I first traced the templates onto the aluminum, and began learning how to cut it with metal shears. It was hard going, and soon my forearms were sore from squeezing the snips, but I managed to cut them all out. All I can say is thank God for a Dremel tool and a file to fix the atrocious cutting job I did! 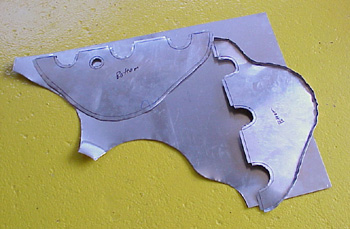 Next, I scribed and crimped the edge of one of the pieces that would form the outside of the heat shield. This was done slowly with a pair of pliers, and vice grips bending a few degrees at a time. 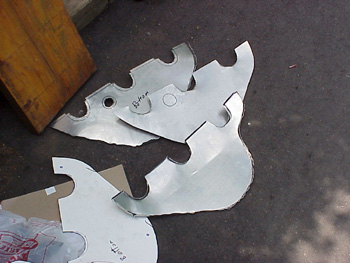 I decided to continue working at François’ since he had some better metal shaping tools for what I had to do next. He noticed how bad my metal cutting technique was, and gave me a few pointers for the inner pieces. One trick is not to cut the shape on the first cut, but remove the excess metal first, so when you’re at the final cut, the shears are not fighting the excess. Who knew?!

I continued folding the lip of the aluminum over to hold the inner shield in place. We cut some insulation to sandwich between the two pieces, and began sealing it all together. 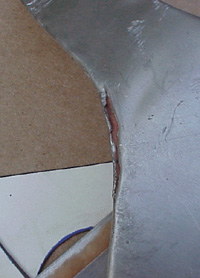 That is when we began to have problems. The aluminum would stretch to a point, but in one place it split open. François was surprised this happened, because soft aluminum should stretch far more than that. Looking at the original heat shields, not one place split, no matter how far it was stretched. 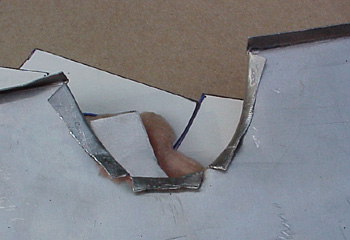 When I tried to hammer over an area that would need the aluminum to really stretch, it split pretty badly. At first, I felt it would not make a difference because this area would be on the bottom, out of sight, but the other side was affected as well! 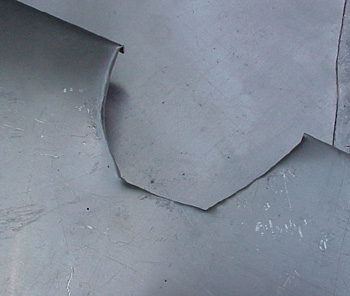 This part needs to have a smooth radius for it to look like the original, not to mention the splits on the other side will only get worse when I need to hammer the scalloped edge into this edge like the original. 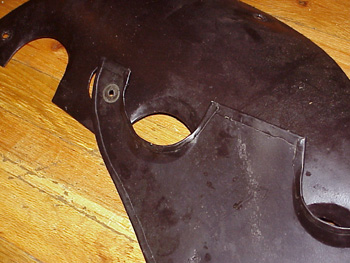 The more I tried to fix the pieces, the worse it got. It was now 6 o’clock, and I spent most of a day working at these heat shields, and the sad reality was that they were unusable. The theory is the aluminum I got is harder than the salesman said, and I’m going to need to get softer stuff. I guess I’ll need to educate myself on aluminum now!

I went home a little defeated, but I’m trying to look at what I learned today, and hope my next work day brings success!