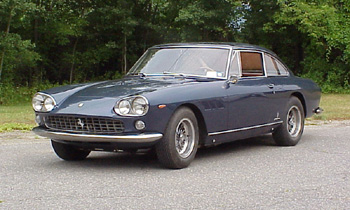 Yale Evelev and I went for a ride in his 330GT 2+2 Series I today. The weather was a little wet in the early part of the day, but the temperature was cool, and that is how this car likes it! It’s becoming a very reliable car with the only big problem being its tendency to overheat in the slightest bit of traffic. François will eventually straighten this issue out, but today, we took the car out for some fun!

Connecticut roads are a ton of fun to drive. They’re mainly two lane sinuous affairs with rising hills, and dipping bends. Setting up the turns for downshifts is such a joy especially when piloting a responsive V-12 car, but I had to constantly remind Yale not to overcook the corners, and to watch for the police. When I got behind the wheel, I could understand why Yale was having so much trouble keeping the car around the speed limit! 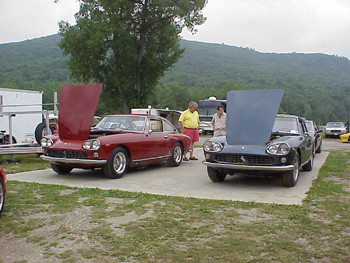 Our destination was Lime Rock Race Track in Northwestern Connecticut where a Ferrari Club event was being held. Unfortunately there wasn’t a lot of older cars represented, but then again, it was a track event, so many of the newer cars were set up for racing. As we crept down the paddock, we saw another four-headlight 330GT 2+2! What a great coincidence! After a while of hanging around, we found the owner, and started chatting about the cars. Ed’s car was a Beautiful Rosso Rubino interim car with a tan interior. I made Yale get his car so we could take a picture of the two cars next to each other. Here’s the two of them comparing the changes between the Series Is and the Interims.

It was a great day of driving, with no mechanical problems. The Ferrari Gods were with us!

Speaking of Car shows, I will be heading out to the “Monterey Car Weekend” in a couple of weeks. If you haven’t planned on doing it this year, it’s too late, but if you’re going, and want to meet, I’d love to hear from you. I’ll be at the Concourso Italiano on Friday, Laguna Seca on Saturday, and the Pebble Beach Event for Sunday. I hope to go to some of the auctions too, so if you see me wandering about one of these events, feel free to say hi! If there’s anything you think I should do, while I’m out there, let me know. I’m open to suggestions!