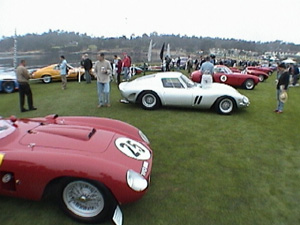 Sunday at Pebble Beach is something I look forward to and something I dread! Coming from NYC I hate crowds! I live with a crowded city everyday, so whenever I get away, I like desolation! Of course the whole Monterey weekend is nothing about peace and quite, and the Pebble Beach Concours D’elegance is probably the most crowded, but seeing some rare cars in the best condition in the world makes it tolerable.

I tried to get there as early as possible, but traffic into the venue follows a maze of snaking roads where no one who’s directing traffic really knows! Most of the people helping out are not from this exclusive area, so asking for the closest place to park at 7 am is useless. Everyone gets directed to the furthest point away from the venue only to take buses and trolleys back to the golf course. If I wanted to park so far away, I would have gone at 9 am with the rest of the world!!! But I digress… There were a couple of interesting displays including this Ferrari race car transporter, but I didn’t manage to get many pictures. As the crowds built through the morning, it became increasingly difficult to squeeze off a shot of the cars without someone walking into the picture. Getting frustrated, I put down my camera!

After stopping by the Christies Auction to preview some cars going across the block later that day, I drove back over to Laguna Seca for my last dose of the race cars. The Trans Am cars were the last run group, and it was great to hear them (with my ears plugged!) going down the front straight!

At about 7pm, I dropped off my rental car at the Monterey Airport to catch a flight to LA. From there, it was onto a red-eye back to NY so I could be back at work Monday morning. As I was waiting for the Saab turbo prop plane to begin loading, an announcement came on about a “technical problem” on the aircraft, and they would keep us informed. As the clock ticked by, my window of opportunity to catch my flight in LA was closing! I’ve seen this story play out before with the airlines, so I decided to try and make the best of the situation. I went to the counter, and told them that I knew I was going to miss my flight. I also knew that even though they hadn’t announced the cancellation, We would all be stuck on Monterey this evening. I wanted them to go ahead and give me my hotel and transportation voucher now, because in about 10 minutes when they do announce the cancellation, I’ll be gone, and out of their hair. I also called Dave, one of the people I met this weekend, and asked if he was still heading south in the morning, and if I could hitch a ride to LAX. My plan was to book an afternoon flight out of LAX to New York, and enjoy the scenic drive down route One, a drive I had never seen before. Since my Monday was unavoidably ruined in NY, I figured I might as well make it an enjoyable one in California!

I confessed to Dave on the way down, with all the things I managed to do in four days, I was just about “car-ed out!”…but it was a good feeling! If you’ve never done the Monterey weekend, I highly suggest it at least once. Even after my “car overload” I may go back next year. Give me a few months decompressing, and I’m sure I’ll definitely go back!