Today was the big day! After two years, in my ownership, and possibly 26 years of separation, engine #5053 was finally reunited with Chassis #5053! 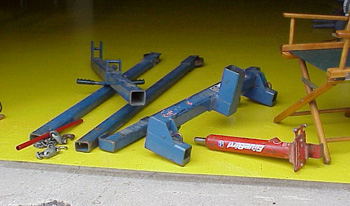 The day started with a trip to the tool rental store to pick up an engine hoist. It cost about $30 bucks a day as long as I got it back in 24 hours. The rental place closes at 5:30 PM so I really wanted to send it back today, as opposed to having to return it over the weekend. The clock started ticking at 9 AM. 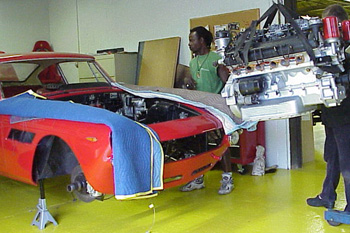 We lowered the car down to smaller jacks and got my engine in the air. Here’s a picture of Alvin, looking into the engine bay thinking “there’s no way this engine’s going to fit in there!” 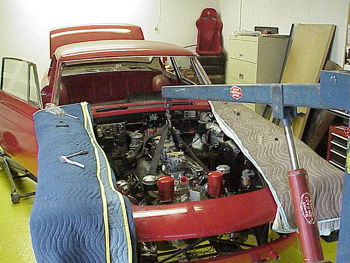 Alvin was almost right! It was a VERY tight fit! The distributors has to be partially removed, along with the coils,  hood latch, and the blower motor, and it still was a struggle to get the damn thing in! We pushed, pried, and cursed the engine into place! From François and Alvin’s experience working on other Ferraris, they both felt this was a real tight fit. It certainly helped to have three people to get the engine in place. One person on the front, one on the back, and one person on the hydraulic pump helped keep damage to the fresh paint to a minimum. 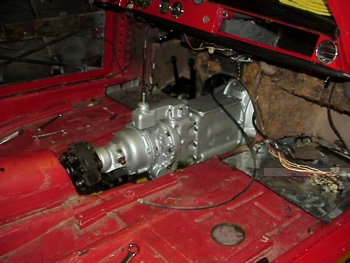 After the engine was installed, we got to work on the transmission. Yes, it goes in from the passenger compartment! I’m at an advantage here because the interior is not installed, so wrestling with the transmission does not involve worrying about getting greasy prints all over a leather and wool interior! It turned out the drive shaft needed to be removed for the transmission install, so after the rear u-joint, and rubber doughnut bolts were removed, the transmission was muscled into place. With François below guiding the bell housing into position, Alvin and I followed his orders to line everything up. 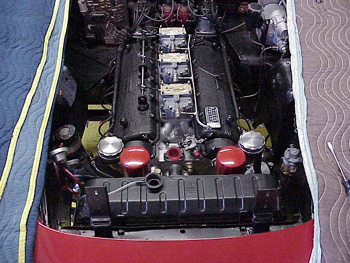 Once the engine was installed, it opened the floodgates to the amount of work I needed to do! I started by installing the radiator, and it’s electric fan that mounts nicely in front where it’s barely noticeable. After that I attached the throttle cable, and reinstalled the distributors. 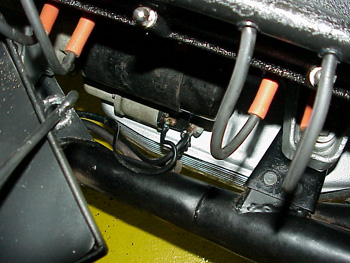 I made the electrical connections to the starter, and was happy to see all the wiring  ending up in all the right places. 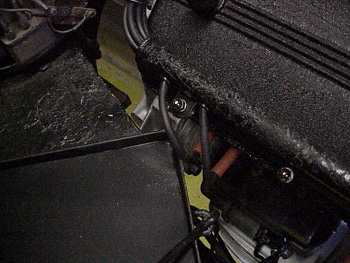 As I inspected the installation, I marveled at how tight everything fit! I lucked out with the battery tray where you can see how close it is to the valve covers. It would have been very embarrassing to have to remove the battery tray with the engine hanging from the hoist. 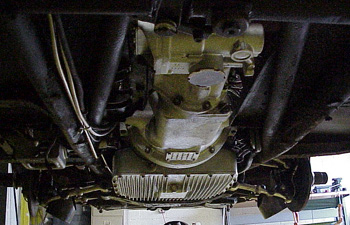 From underneath it’s just as tight. This is a shot from under the car looking forward. The two major clearance issues were the distributor stands at the rear of the engine, and this massive oil pan that you can see at the bottom of the picture. It fits with nary an inch to spare on either side…BUT IT’S FINALLY IN!!!