A Peek at a Great Collection

A fellow 330 America owner is a well known Ferrari collector right here in New York. I’ve heard about his collection of Ferraris, but never thought I’d ever get a chance to see such a sight. A chance meeting with Peter Kalikow at the Pebble Beach Concours D’elegance a few weeks back led to my invitation to see his cars, and especially the 330 America François Sicard restored for him that was featured in Cavallino! Not letting an opportunity like this to pass me by, I called Mark, his car manager/restorer/point man, and arranged to meet. 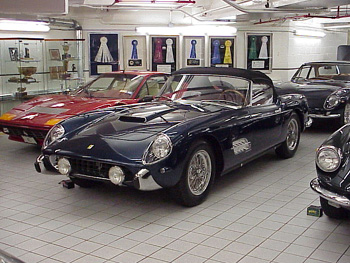 Through a lobby elevator, I took it down to the garage level where I was led through the public parking area to an air conditioned section closed off from the rest of the world. In this brightly lit garage lived some of the finest Ferraris in the world. Having one or two concours perfect cars would be an achievement, but this collection was awe inspiring! 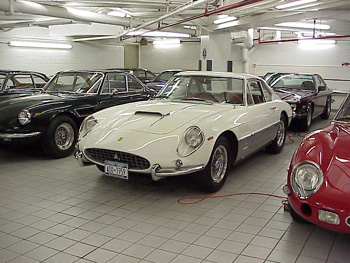 Along with perfect cars were recently acquired cars waiting to be restored to perfection like this 400 Superamerica. 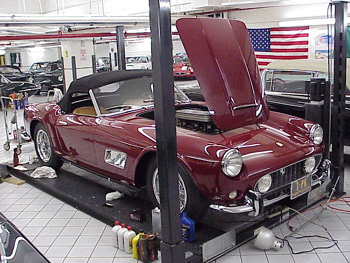 The place for Mark to do minor detailing on the cars would be the envy of any mechanic. Here a California Spyder gets some minor servicing. 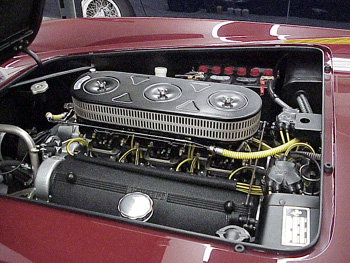 Mr. Kalikow used this car quite a lot this summer, but you could never tell from the detailing. 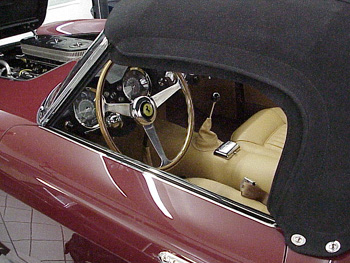 It was like viewing fine art when I was examining these cars! 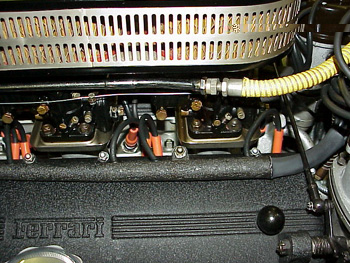 I love seeing the small details in the engine compartment. Can you see the drip trays at the base of each carburetor? These inside plug 250 engines used these trays to keep leaking carburetors from igniting the fuel when it came in contact with the spark plugs! Ferrari soon changed the design and moved the plugs to the outside of the engine block. 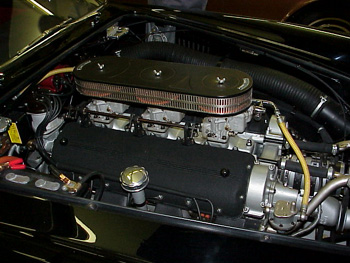 Although this picture may not show it off well, this is a HUGE Ferrari motor! If lives in a 410 Superamerica, and displaces 4.9 liters! Considering the normal production Colombo engines of that era were 3 liters in size, this Lampredi engine dwarfs the “small block” Ferrari V-12s. 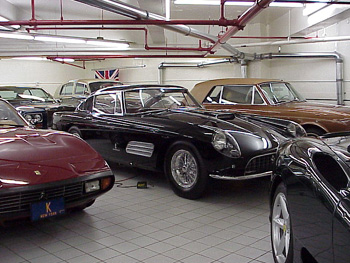 Mr. Kalikow, who joined us half way through the tour, said that at 85 mph it would make too much noise in third, but in fourth, it would bog the carburetors! Going faster in this car to smooth out the carbs would really make me think about how fast those drums could slow this car down! 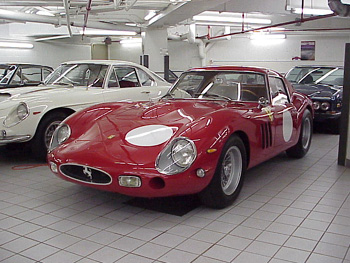 Another interesting car is this GTO Replica. It was originally a two headlight 330GT 2+2(9325), but before you accuse Peter Kalikow of chopping up another 2+2 to make a replica, there’s a good story behind this car. It was a derelict car sitting outside, behind a New York area Ferrari shop. A snow plow hit the car, and ruined the nose and the rear of the car. The owner of the shop got $14,000 on the insurance claim, but told Peter how he wished he had gotten $20K for the car. Peter offered the $6,000 difference, and got the car!

Since the body was so far gone, he decided to make a GTO replica from the chassis. As they begin rebuilding the engine they discover the serial number did not match the chassis, but instead turned out to be the engine that belonged to another car Mr. Kalikow owned! That 330GTC blew its motor early in it’s life, and was fitted with a replacement engine. It’s original engine was probably later resurrected to be installed in this derelict car! Not a bad out come from an initial $6K investment!

I’ll show more pictures when I get some more time, even pictures of Kalikow’s 330 America which was the reason for my visit in the first place!