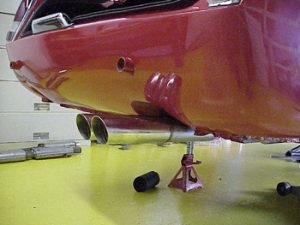 I started fitting the Stebro exhaust to my car. The first thing I had to do was hang the rear section to see how it looked coming out of the rear of the car. VROOM VROOM! 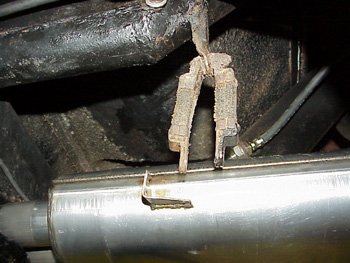 My first problem in the rear section was one of the hangers is slightly off. I tried pushing the whole system back to meet the mounting tab on the muffler, but it would throw the whole system off its alignment with the undercarriage. Is it Stebro’s fault? I don’t think so. As I’ve learned, Ferraris were hand built, and differences occur from one car to the next. If it were a German car, or another mass produced automobile, I would complain, but ahh, those Italians! 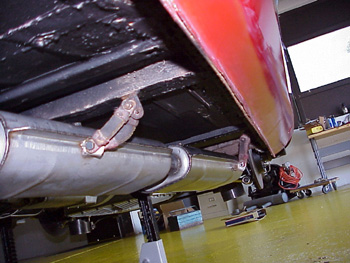 The front hangers lined up fine, but the true test will be when I receive the front pipes, and hook everything up. 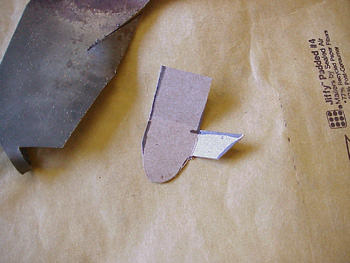 I traced one of the hangers from the right side of the car to make a missing one for the left side of the car. Here’s a piece of scrap metal that’s the same gauge as the original hanger. 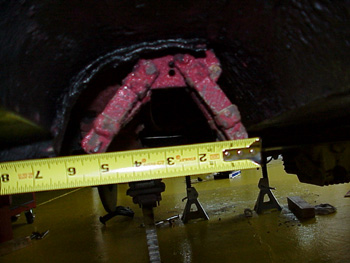 For the left side of the car, I found another slight problem. The rear hangers are spaced about 5 inches apart, but… 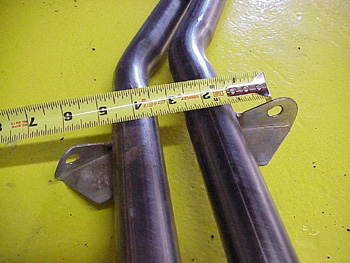 …the exhaust brackets are spaced 6 inches apart. I checked the right side measurements, and they were 5.5 inches. There was enough play in the hangers to make up the half inch, but the whole inch discrepancy for the left side was too much for the hangers to reach. I decided to get my rat tail file out, and enlarge the holes to fit. No big deal. 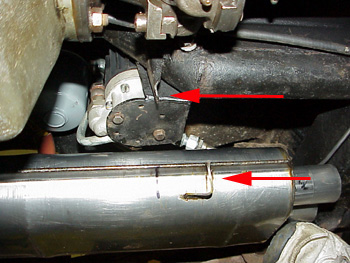 Unfortunately, the left side exhaust is also off, so I’ll have to re-weld both sides. (note my toe in the lower right corner of the shot to hold the exhaust in place. The things I do to show you clear pictures…!) 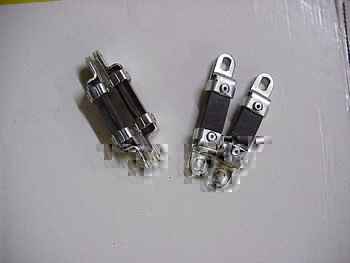 Partsource sold me these hangers, but I miscounted. I’m going to need four more, and that’s not including the grungy ones I should replace! 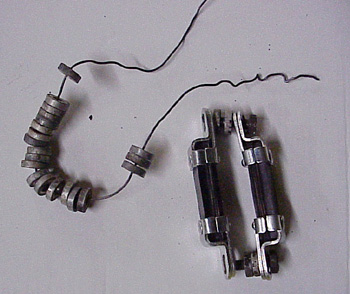 The amount of loose parts is dwindling, but I’m constantly learning about new parts! This string of aluminum spacers has been on the shelf for the last two years. I have always wondered what they’re for, until François pointed out their use on the exhaust! I hope I have enough.

Kerry Chesbro had an extra fuel pickup that he sent me in the mail, so I installed it to finally complete the fuel system! Thanks Kerry! The screen slides over the end of the tube keeping large pieces of trash from getting into the carburetors. The screen slipped loosely on the pickup tube, so I soldered a ridge on the tube so the screen would fit snugly on the tube. Now when I slide it down into the gas tank, I won’t have to worry about it falling off! 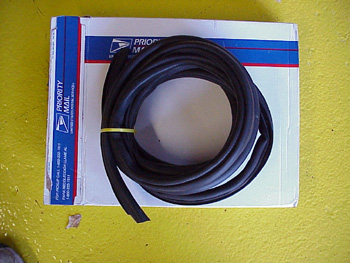 Kerry’s generosity did not stop at the fuel pick up. he also sent me some slightly used door seals from his car. He owns a Series II 330GT 2+2, and installed the wrong door gasket. Recently, he found the correct seal, and took the wrong stuff out. The old seal was for an earlier car (my car), so Kerry asked if I had use for the seal. We have a saying at work: “If it’s free, it’s for me!” I traded Kerry for some fabulous “330 America T-shirts.” Thanks again, Kerry!