I’ve spent the last few days trying to find tires for my car, and so far, it doesn’t look good. I apologize if this gets complicated, but try to to keep up! 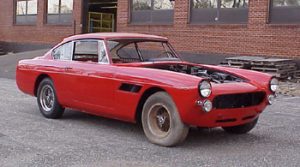 Originally my car came with Pirelli Cinturato 205-15s, meaning they had a tread width of 205 millimeters, and would fit on my newly refurbished 15X6 inch wheels. Missing from this measurement is the sidewall diameter because I think in 1963, this size or aspect ratio was the same for passenger cars. Today tires are measured with three numbers, the tread width, the aspect ratio (sidewall height), and rim diameter. Translating my original tire size, I should be looking for a 205-80-15. The 80 aspect ratio is not a common size in today’s tires, and it became apparently obvious when I began my search in earnest this week!

Pirelli long ago discontinued the Cinturato, so that was a dead end. The next choice was the Michelin XWX which was found on many Ferraris of that era. Coker tire has the molds for these tires, and occasionally stocks this tire, however, not my size! The 14 inch Michelins Coker did have were priced in the $250 dollar range, so I began to sense how expensive my tires could get!

I then tried British Wire Wheel In California to see what they had. He told me about Avon tires, and how they make a tire that matches my 205HR-15 size, but no longer stocks it because there weren’t enough sales to justify it. The person on the phone also informed me that Avon was recently bought by Cooper Tire, and they have stopped importing this odd size to the U.S.! I called a local tire dealer that stocks both Cooper, and Avon tires, and they basically confirmed this problem! The dealer is working at finding if anyone has a stash of tires somewhere in the US, but I’m not holding my breath.

My next step was to e-mail www.vintagetyres.com in England. They have the Avon Textile tire in 205HR-15 for my car, and they want £149.50 GBP each. That translates to about $240 bucks each, not including shipping!! I’ll still need to buy tubes, and get them mounted! Vintage Tyres suggested I call Universal Tire in the PA to see if they could help. The guy at Universal Tire gave me the same response I got from everyone I asked about my tires, “Sorry, I don’t stock that size anymore!” He also repeated the story about Cooper Tire, and how certain Avon tires are harder to buy in the U.S. He did, however, offer to drop ship my tires from Vintage Tyre in England on his next container of tires to save me the shipping costs. Unfortunately, the next container order will probably not be until Spring!

Now if you’re still with me, let’s discuss my next option. I could go with a lower aspect ratio tire like a 75 Series tire. This tire size is widely available for most passenger cars, and can probably be found in a 205-75-15. This size tire is 0.7 inches smaller in diameter, so the radius would lower the car by 0.35 inches. I could probably live with this tire size. I don’t believe a 215 wide tire would fit on my car when you consider the 210s pictured on my car already look too wide! Now the decision is which 205-75-15 tire to buy? I’ll probably buy one, mount it on one of my new Borranis and trial fit it to each corner to see how it looks. If it passes the visual test, I’ll buy four more, and call it a compromise I can live with.

Anybody have any other ideas? Anyone have a set of 205-15 Avon tires laying around?… Anyone?