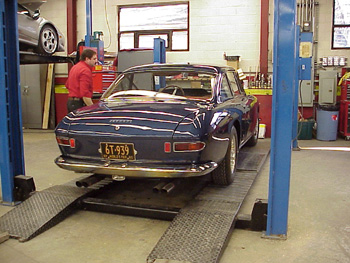 Yale Evelev needed to get his oil changed on his 330GT 2+2, so we couldn’t think of a better excuse to take it to a Ferrari shop near New York City. Yale’s car has been mentioned here on this web site from time to time, and he is just past his one year anniversary of ownership of his car. It has has its share of teething pains, but for the last few thousand miles has provided him with a bunch of fun. 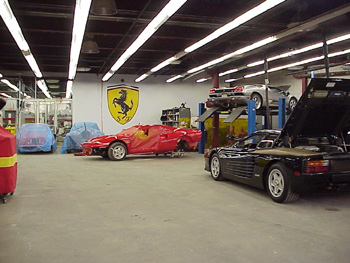 I’ve heard about a shop called “Classic Coach Repair” in Elizabeth, NJ, and have been meaning to stop by for a visit. Having Yale bring his car there for some minor service would give me a reason to stop in and look around. In a large cement and glass building housed a huge restoration shop with many types of cars and restorations. They had several F40s, along with a 288GTO fresh out of the paint booth. Modenas, and 355s were almost too common in this shop. 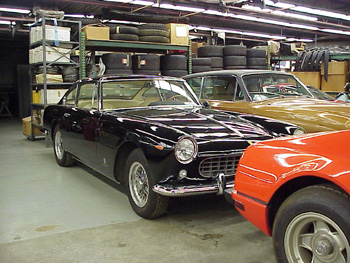 On the second floor, another treasure trove of exotic cars was stored. Here’s a nice Series I GTE with a nice cream leather interior. There were two Murias, a Ghibli, a few Boxers, a bunch of Rolls Royces, and a car that really caught my eye… 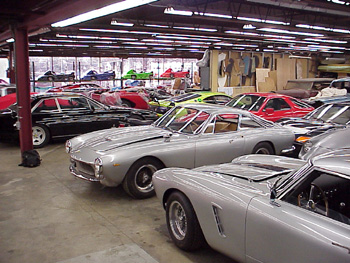 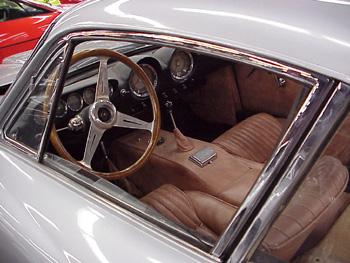 a 250 Lusso! If you haven’t heard before, I’ll tell you again, I love these cars! I can’t see one of these cars and not stop and walk around them. They really draw me in. This car really tugged at my heart strings because it wasn’t perfect. I really have a soft spot in my heart for slightly neglected cars. I have this need to buy them and take care of them, and this one looked like it could really use some attention. The inspection sticker dated back to 1977, and the paint was crazed and faded. All the pieces were there, but it looked like it would need a complete rebuild to get back on the road.

As Yale and I were looking at this car, the owner of Classic Coach came upstairs. Onofrio Triarsi told us that everyone calls him “Frank,” and welcomed us to his shop. He was pleased that we were drawn to the Lusso, and told us that he owned the car, and it was parked in ’77 and hasn’t been driven since. He knows how expensive it will be to restore this car, so he’s simply holding onto it! I offered him my 330 America completely done in trade for it, and he said “bring it down, and we’ll talk!” 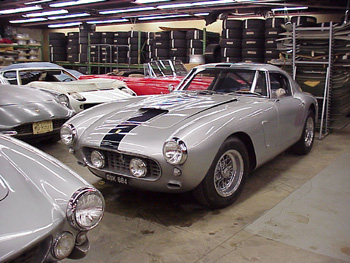 A stable mate to the Lusso was this nice SWB (250 Short Wheel Base), and poking its nose in the back is a forlorned 365GT 2+2. That car was in even sadder shape than the Lusso, and hasn’t been driven in about the same time. Unfortunately, if the Lusso is barely worth the expense of restoration, then the 365 is even less, so they sit and wait. Hopefully one day they will come back to life in the care of the right owner.

Frank has been in this location for thirty years, and started it with a wooded garage. Through the years he’s built it into a repair, and restoration facility complete with areas for metal fabrication, paint, and upholstery. He doesn’t really advertise, but seems to keep pretty busy without it.

Yale’s car ended up needing new plug wires after a couple melted from the heat of the exhaust headers. A new set was made up, so we waited well into the afternoon for the work to finish dashing my hopes to get some work done on my car today, but that’s life with old Ferraris. As Yale and I drove back to NYC, I realized that sitting at Ferrari shops waiting for my car to get fixed is something I haven’t done, so it was a good experience living vicariously through Yale!