Sorting Out the Electrics and Borrani Mysteries

1/4/02
Sorting Out the Electrics and Borrani Mysteries

A few weeks ago I began experiencing some intermittent electrical gremlins when I was trying to sort out the door wiring, so I decided to start the New Year by addressing the electrics from start! It’s something I dread because it can get very confusing, especially when all my electrics were unplugged by someone else who didn’t label anything! 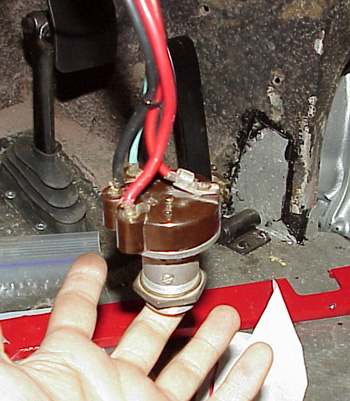 Not knowing if this wiring is even correct, I photographed it anyway before I began unplugging the wires to the ignition switch. A digital camera really comes in handy for this job especially when I’m so lazy at writing things down! 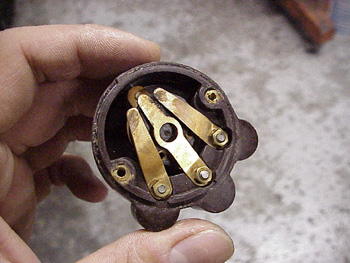 Inside the switch, I found one of the brass blades making contact with the starter circuit. This would have caused the starter to run all the time when the ignition switch got power. It’s a good thing I checked this now! 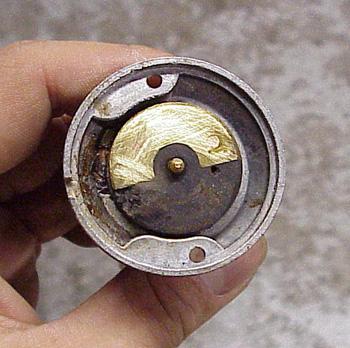 On the reverse side of the switch is this rotating disc that completes the circuit with the three blades you saw in the last picture. The center pin completes the starter circuit when the ignition key is depressed. There was arching, and oxidation on this disc which was the reason for my intermittence. I took some fine sand paper and cleaned all the contact surfaces. 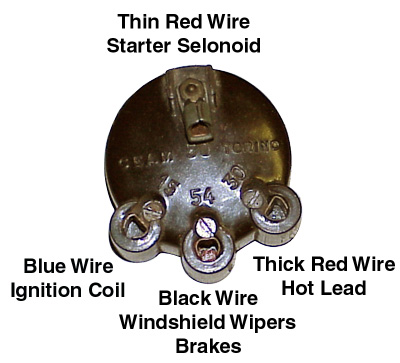 After cleaning everything up, I took a good look at the switch and deciphered exactly where all the wires should go. The GTE owner’s manual tells which circuits go on at the 90 degree mark, and the 180 degree mark, so by identifying which wire was which circuit, I knew which one to plug into the first and second circuits. If I lost you, just use my diagram to plug your ignition switch in! 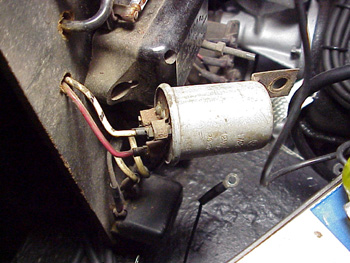 Now that I got my ignition switch in working order, I decided the next test was the turn signal wring. I installed one fuse to power up the turn signals, but immediately heard clicking and smelled smoke. Just as I pulled the ground wire from the battery, I noticed the smoke emanating from a small aluminum cylinder mounted on the fuse panel. This was obviously the flasher unit, but since I hadn’t even tripped the turn signal, something was feeding it power to the flasher and shorting it out. I was pretty worried the extra juice might have burned out the ancient Italian flasher. Flashers are cheap, and any one will work, but I love being able to preserve the original equipment on this car. 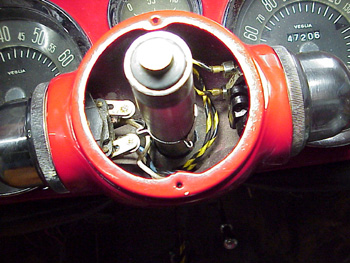 I took a couple steps back into the wiring of the turn signals. After some close scrutiny of the wiring diagram in the owner’s manual, and some more head scratching, I found two wires in the steering column were cross patched. Although I followed my notes explicitly, these wires could have been plugged in wrong by the previous owner when the dashboard was removed. Luckily, after I figured out what was wrong, the flasher was still working! I also discovered the turn signal indicators were incorrect, where the “left” indicator would flash “right” in the speedometer cluster. This was fixed by simply swapping out the light bulbs behind the dash. I found another loose wire leading to the rear of the car and explained why the left rear indicator was not working. After the wayward wire was plugged in the appropriate hole, I had fully functioning turn signals!

I’ve been helping François answer the phones while he’s been on vacation, and today I spoke Wheel Tech Ltd. who restores Borrani wire wheels. The owner is Bob Gates, and he’s located in Colorado. Bob just finished a set of wheels for François and is ready to ship them to Connecticut. Since I had Bob on the phone, I decided to pick his brain on his knowledge of Borranis. There seems to be almost no information out there on Borranis and how to true them, balance them, and mount them. I tried going to web sites like Hendrix Wire Wheel, or British Wire Wheel, but they seem specialize in British wheels, so I asked Bob to help me clarify the mystery!

First off, when it comes to balancing a Borrani, it can be done with ANY modern wheel balancer. The British wheels have problems because the hub faces are the only thing that’s machined true, and getting the cone of the balancing machine to fit this set up is difficult. Borranis have a completely machined hub, so the cone mounting hub should be fine.

Clip on weights can be used on either side of the wheel, or stick on weights can be taped to the inside of the wheel. Just be careful of the caliper clearance! Bob says that he has often found Borranis to be very out of balance because of the way they were originally manufactured, and the Michelin XWXs from Coker often add to this imbalance. He offered a great tip that he says will not hurt the tube, but help hide all the lead weights. He said to make notes how much weight is needed to get the wheel in balance, take the air out of the tire, and tape the majority of the weight INSIDE the rim. Cover the weights with some strong tape to keep the sharp edges from puncturing the tube, and reinflate the tire. He says this will keep the amount of unsightly weights from hanging on the outside of the rim. Anybody try this before?

I also asked him about the size of the hole in the rim for the valve stem. The hole Borranis have for the valve stem is much larger for the modern tube, and Hendrix Wire Wheel even sells grommets to fill this void. When I asked Bob what his thoughts were on this, he said that there should be no danger of cutting the valve stem from this extra space because the only time the tube would slip in the rim would be from under inflation, but using these grommets wouldn’t hurt.

I hope this information Bob Gates provided helps clarify some of the mysteries of the Borrani wire wheel!

(Today I was determined to write this journal entry without any mistakes to thank Kerry Chesbro with his work in catching all the typos, misspellings, and errors in diction! Usually, by the time you all read this page at work Monday morning, Kerry’s already caught the errors, and I’ve fixed them! Thanks Kerry!)