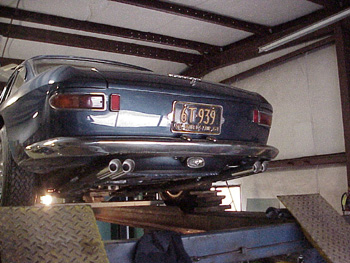 With all this research I’ve been doing on exhaust systems, I thought it was worth giving up a day of work on my Ferrari to go with Yale to Plainfield Connecticut to get his Timevalve Exhaust installed. Although it was a three hour drive from NYC to Plainfield, it was close enough to have them do the installation. Although the owner has been building stainless steel exhausts for Mercedes since 1977, copying Ferrari exhausts in stainless has only been done for the last few years. He’s learning that they’re not all the same, and each system has to be fitted to a particular car. It made me feel better about the struggles I’ve been having with the Stebro system! 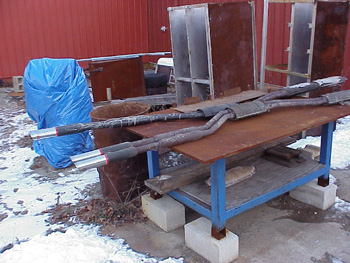 Yale’s car has been getting louder and louder in the past couple of months, and his wife and kid have almost been asphyxiated while sitting in traffic. Over the summer, one of the exhaust tips fell off on the Long Island Expressway, never to be seen again! François helped weld a tip he had at the shop, but Yale knew that it was a loosing battle. After hearing about what I had to go through to get my Stebro system, he decided to call Timevalve. Although their system is more expensive, they offered to install it since we’re within driving distance. The installation would be a flat fee for about three hours of work, and we felt that it would be a good deal knowing what problems can arise when working with Ferraris. 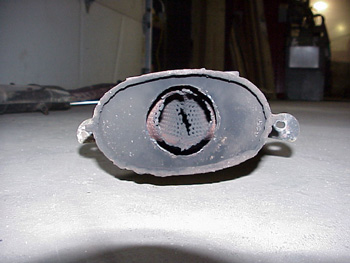 The main problem with Yale’s old exhaust was the front muffler had cracked at the weld. Although some of the pipes looked solid, you could never be sure what would go next. Mild steel exhausts often rust from the inside out, so who knows what was hiding under the black paint. 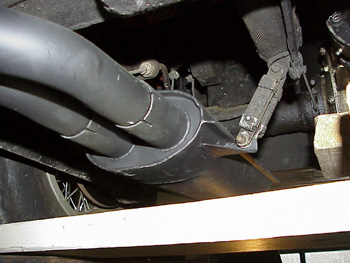 They welded up the pipes during the week, and they looked real nice. Yale had them painted black to give it a stock appearance. They sand blasted the completed system to give the surface some “tooth” so the paint would stick. 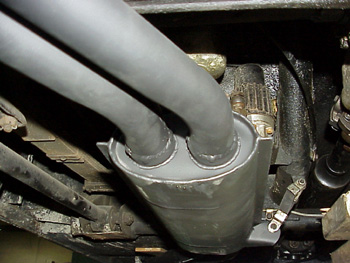 These hangers lined up fine, but Dave had to move a pair of them up front. He told us that one Ferrari shop that orders his systems asks him to send the hangers separately so they only have to weld them on once! They’re learning that no two cars are exactly the same. 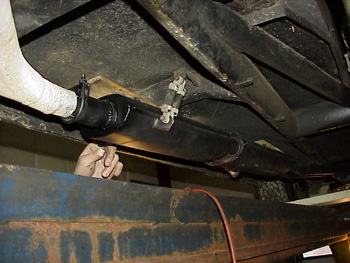 Another modification was the front inlet pipe. Timevalve’s jig had the front pipe going into the muffler at an angle, but on Yale’s car, it went straight in. Since we were at the place that made this pipe, cutting it off, and re-welding it straight was not a problem.

A neat trick François told me about last week, that I saw in practice here is to wedge some wood between where the exhaust system might rub on the car, and adjust the hangers for clearance. Once everything clears, remove the wood, and you shouldn’t have clearance problems. Let’s hope my system clears as easily as this Timevalve system. (BTW, Yale’s y-pipe looks kind of white in this picture because of the camera’s flash, and because it was aluminum coated by the previous owner.) 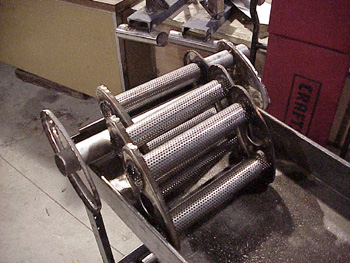 Timevalve makes everything for their systems in-house, and usually to order. 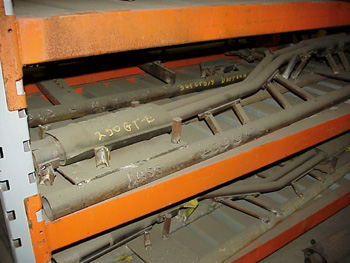 They have jigs for many of the vintage Ferraris. 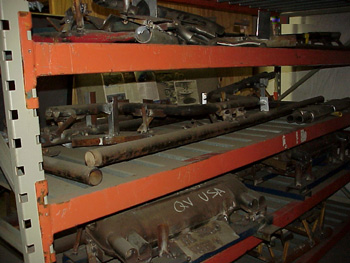 Along with the later mid-engined Ferraris. 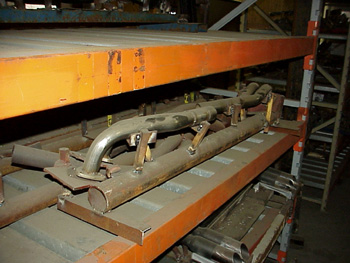 Here’s the jig for the elusive y-pipes that I was looking for!

After about four hours, Yale had a new exhaust system installed. Here’s what it sounded like when he first started it. (click on the picture). It was late in the afternoon, and we needed to get back to NYC, so I didn’t get to make more recordings of the sound at speed, but it was a great improvement over the broken exhaust! As the weather gets better, and we have some time, I’ll make some more recordings of this exhaust, and hopefully some of my Stebro system to compare. Yale’s initial impression was that the idle character is quieter, but with a nice deep burbling. At higher speeds it emits a louder low frequency rumble, but has lost some of the reedy rapping when at full throttle. This could change as François tunes the engine to run with this new exhaust. We’ll try to give a new report on this as soon as possible!