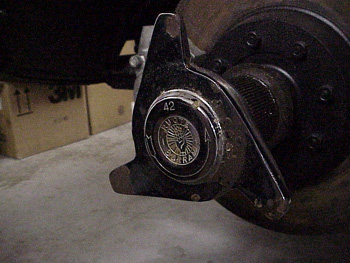 It’s snowing in NY, so I’ve got some time to think about knock offs. As you can see from this picture, my knock offs are not in the best shape. The chrome plating has chipped off on some of the ears, and other places are pitted and scratched. My first step was to see how much new Borrani knock offs would cost. According to  http://www.ferraripartsexchange.com/ they wanted $375 each! Knowing I could find the same thing cheaper, I called  http://www.ferrariparts.com who had them significantly less, but not cheap! Geof at Partsource asked me which knock offs I had because they changed through the model years. We’re only talking about “42” sized hubs. There is a “32” sized hub, but that’s another issue. Some places refer to these as 42mm, but I think it’s more to do with the number of threads. Anyone want to clarify? 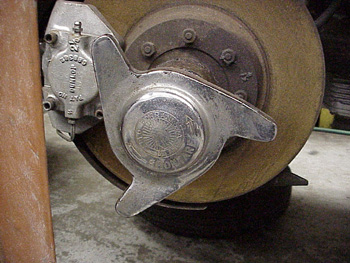 The early 42s have a convex center with a sunburst design on the center. This one is on a Series I GTE, which dates it about 1960. Geof says that these knock offs are very rare, so refinishing them may be your only option. A couple days later, he called to say he actually found one new set. 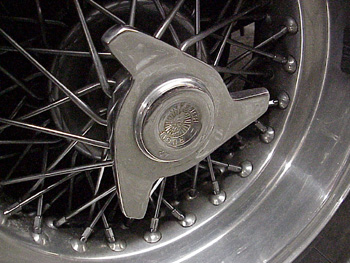 This picture shows the next design change in the size 42 knock offs. The centers are now concave, and the logo in the center is a hand with the palm facing out. This one goes to a 330GT 2+2 Series one that dates to about 1964. Borrani changed to this design sometime between 1960-1963. If anyone has a GTE, maybe you can tell me who has which one. I think I’ve seen Series II cars with concave knock offs, but I’m not sure. 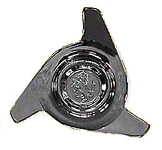 Later on the Ferrari Cavallino was the logo on the knock offs. I’m not exactly sure when this happened either, but would love to hear form anyone who has thoughts!

Anyway, withthe cost of new knock offs, I’m going to first try and find how much it would cost to have mine replated. Although the chrome is in bad shape, the ears are surpisingly unmangled! I’ve seen some knock offs so beaten that it may be better off starting out with new ones!

Anyone have suggestions for good platers? The warning is to find someone who won’t grind the details off the knock off when prepping the piece. I would use Francois’ regular guy, but he’s just too expensive! His work is flawless, but I’m on a budget!