Someone sent me pictures of this car. Although I’m not a fan of chopping up cars and swapping engines, this is an idea you don’t see everyday! Usually, it’s the foreign car owner that swaps in a V-8 because he can’t afford to buy the parts to keep the exotic machinery alive, but this owner has it the other way!

Here’s what came with the submission:

Attached are some pictures of a Car you may find interesting. 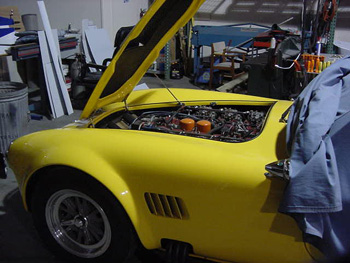 It is a Cobra + a 12 cyl Ferrari motor out of a 1972 365. I happened to be picking up an English wheel and I noticed that this Cobra had a 6 into 1 Exhaust on both side of the car and I thought to myself “This isn’t right”

The shop owner told me that he had built this for a guy that loved both Ferrari’s & Cobras. He does irritate both camps when they see what he’s built. 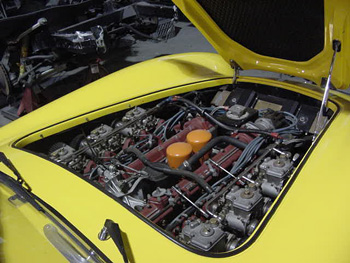 Phil Hill drove it to 194MPH, and it was covered in the magazines when it was built.  I know it is for sale, because he wants to build a new car. I would like to buy it, but I have another project underway. 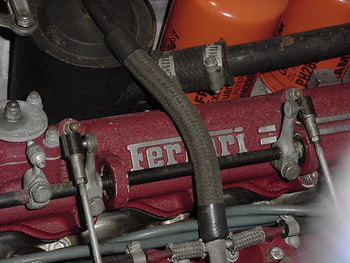 I hope the die-hard Ferrari fans can appreciate the Pics of this car. The car sounds awesome.

When I saw these pictures, I only had more questions! I wonder if they were able to keep the shape of the hood the same as the 427 Cobras. What transmission was used? Where does the shift lever end up? It’s probably a fiberglass car, so how much of the frame was modified to fit the engine. Does it use the Jaguar IRS? Anybody know anything about this car?