The Drudgery of the Differential

2/15/02
The Drudgery of the Differential

For you guys to understand what I’m trying to do with my rear differential, I found this old picture to show what I’m dealing with. It would have been great to attack this job back when this picture was taken where the gas tank was out, and there was no exhaust, but I digress. The plan is to remove the axle tube from this side so we can get the cover plate off the differential to have a look around. Unlike more conventional differentials where the inspection plate is on the rear of the axle housing, this one is on the side. 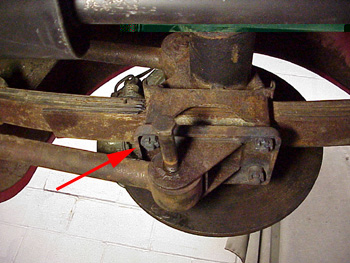 This area is what I worked on all day. These four castle nuts, and two locating arms hold this axle tube in place, but getting them removed was a real problem. Before even attacking these nuts, I first had to remove the following:
1. rear brake lines
2. Parking brake cable
3. brake caliper
4. rear hub and brake disc
5. caliper bracket and hub seal
6. rear axle check cable
7. rear exhaust
After all that, I got to work on the axle. François managed to loosen two of the shackle nuts by heating them up with a torch, but the two that were obscured by the locating arms (red arrow) were well seized, and getting a socket on them was impossible. We decided to resort to cutting these two of the shackle bolts off, and buying new ones. 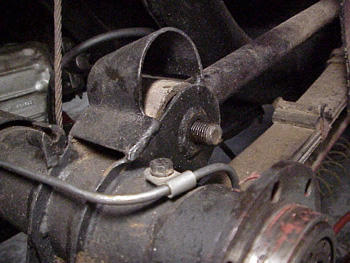 Before removing the shackle bolts, however, I still needed to get the locating arms off. Surprisingly, the bottom one came out without a problem, but it was not to be the same with the top bolt. Taking off the brake caliper and disc gave me a better shot at the bolt, but it was rusted to the steel sleeve of the locating arm bushing. I pounded away at the bolt, and soaked it continuously with penetrating oil. We even tried an air hammer with no avail. That baby’s stuck! François says he’ll try this week to apply pressure and penetrating oil to hopefully make the bolt let loose, but until then, we’re all stuck! 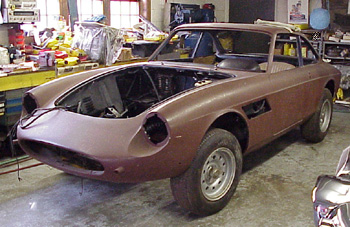 Sometimes when I’m in deep despair with my restoration, François’ shop can offer me the inspiration to continue. Another restoration project arrived at the shop this week, and it’s a 330 GTC. It hasn’t been on the road for over 10 years, and has been taken apart into its component pieces in that time. Putting this car back together will be a monumental task, much like the one I took on 2-1/2 years ago! Seeing a car like this makes me feel better about how much closer I am to completion! 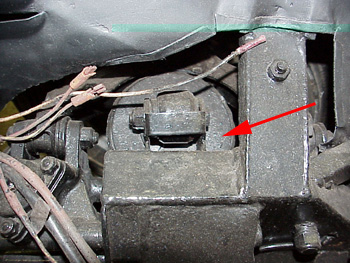 While we were inspecting this car, François showed me a weakness in the front suspension that was not upgraded in this car. This is a shot looking down into the engine compartment at the top of the coil spring and shock. Some GTCs experienced failures in this area so an extra piece of metal was welded to this area to strengthen this mount. This space shows that this car was not modified. 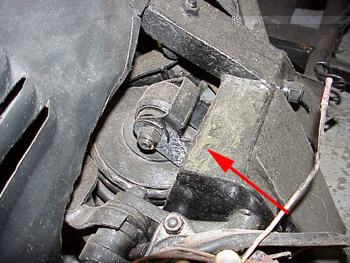 Here’s a side view of the same area that shows the gap. François told me of how when the left side shock tower failed (This picture is of the right shock tower), the suspension would collapse into the steering column, jamming the steering. Soiled shorts would have been the least to have happened in that instance! Obviously, this car will get some reinforcement welding before it’s reassembled! 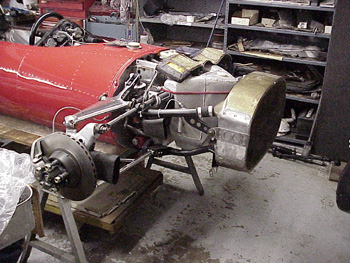 There has been a lot of requests for more pictures of the 312 F-1 car being restored at François, so here are a couple more. You can see there is a brake cooling duct, but what’s a little harder to see is another cooling duct that’s dead center of this picture. It looks like it supplies fresh air to the driver’s foot box. With the coolant running inside the frame tubes at 200F+ degrees, it must have gotten hot in there! 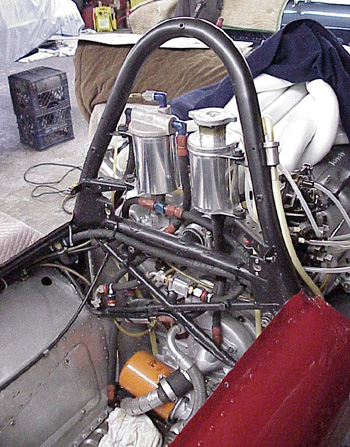 Here’s a shot of what lives behind the driver’s seat. I first thought, “what a inconvenient place for an oil filter,” but soon realized the whole engine comes out when it’s time for an oil change! Duh!

On either side of the driver covered by the aluminum are the fuel tanks. The rubber bladders are now replaced with modern foam filled fuel bladders with a stronger material. Too bad this stuff wasn’t around when Bandini drove a 312 in Monaco. 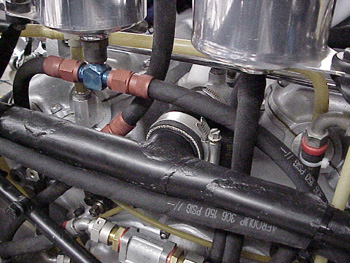 This is a close-up of the previous picture showing how the coolant pipe from the engine is fed into the chassis tube carrying the fluid to the radiator. I’d hate to be involved in a crash where one of these pipes ruptured! Imagine choosing between being burned to death from leaking fuel bladders, or scalded to death from spraying coolant!