Being Smarter than the Bolt! 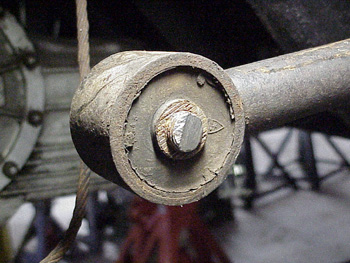 I took my trailing arm with the stuck bolt to my friend at the CBS Broadcast Center to see what could be done to coax it out. Dave Dalianis first tried drilling it out. The drill bit made good progress, but as the hole got larger, the material got harder towards the outside of the bolt. The hardening process of the bolt made for some real tough steel, so we decided to try pressing it out with the hydraulic press down the hall in the machine shop. I forgot to bring my camera, but this press looked like it was from the fifties when CBS was still building the parts for television! It was capable of TONS of pressure, so we gave it a shot. Dave first found a steel rod in the same diameter, and machined a nipple to slide into the hole we drilled. This would keep the short rod centered on the bolt. This was all backed up by a 1/2 socket on the other side in the press.

It was scary watching the pressure build with the bolt remaining in place. Eventually the rod began to buckle! Now that was a lot of force! Considering a regular arbor press is capable of about 1-2 tons of pressure, this hydraulic press was probably exerting around 6 to 8 tons before we backed off? 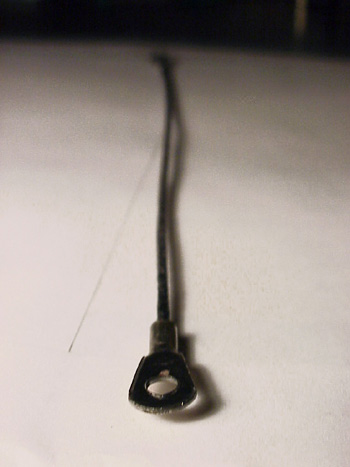 With the small hole drilled into the center of the bolt, I had another option. Dave suggested I buy a “rod saw.” It’s a carbide impregnated abrasive wire that mounts in a hacksaw frame. It’s hard enough to cut through the hardened steel, and would save his drill bits (and our ears from the screeching)! It would take some time, but eventually I would remove enough material to release some of the pressure from the sides of the bolt to be driven out, but before I went this route, I gave Geoff Ohland up at Partsource a call to see how much this damn rubber bushing cost to replace. “$89.95 each, and I’ve got a bunch of every one you’ll need for your car!” was what he said. Now if you weren’t as stubborn, cheap, and determined to win this battle, buying these bushings may be the way to go, but a $6 dollar saw blade was worth a try! 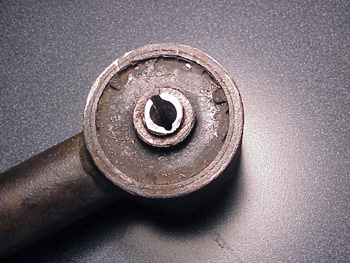 I carefully bent the end of the blade to fit inside the hole of the bolt, and fed it through. After flattening out the end, and mounting it to the hacksaw frame, I made good work of the sawing. It was getting late in the afternoon and everyone wanted to go home, so I had to quit for the day. If my apartment in NYC had a vice, and some punches, I would have gotten this bolt out, but I’ll win this battle yet!