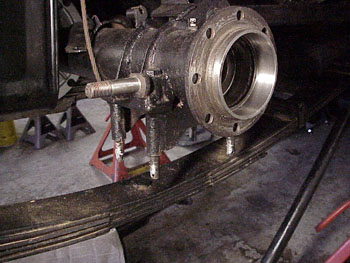 Getting the leaf springs back into a car ranks as the worst thing to do on a Ferrari, according to Francois, so I was prepared for the worst! If you look carefully at this picture, you can see the center bolt to the leaf spring doesn’t even come close to aligning with the axle tube. Using various pry bars stuck in the spring shackles, the correct position and tension in this spring was attained so the whole assembly could be jacked in place. I used the left side of the car for reference so the shackles would end up in the same angles. Without this point of reference, it would have been that much more difficult to get everything aligned. 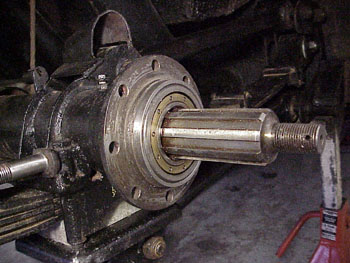 Once the axle bracket was bolted in place, I installed the axle shaft. The bearing was carefully tapped into place and seated in the axle tube. 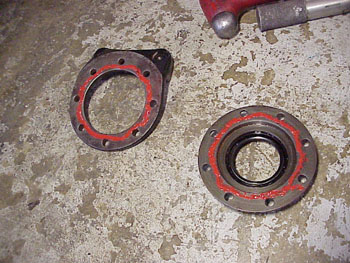 The next step was to install the brake caliper bracket, and hub seal retainer. Although I’ve probably mentioned this before, this is a good time to put a thin bead of silicone sealant to these machined surfaces to prevent gear oil from seeping out onto the brakes. Often times even after replacing the rubber seal (pictured on the right) , oil still leaks out of the axle tubes. The culprit for these leaks is found in these mating surfaces. 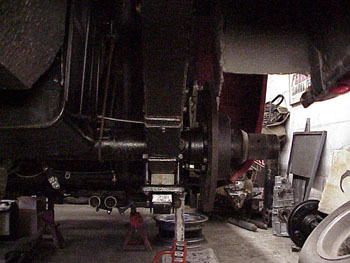 Although this picture shows a lot of black suspension pieces, it proves that the right side of the car is basically back together, and managed to do so without getting hurt! The brake lines still need to be installed, and the shock will go in after that, but since I need to take some of the brake lines off the other side, I might as well wait when it all goes back together. 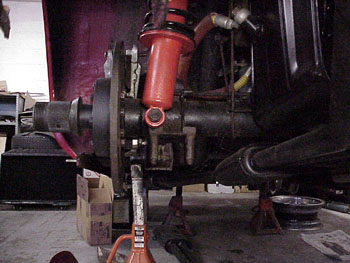 Here’s a shot of the left side of the car with the spring already removed!!! I decided to try removing as little as possible while pulling the left leaf spring. Only if something was stuck, or I needed more access, would I remove more components. In the end, all I needed to remove was the lower control arm to get the spring out. Unfortunately all four axle bracket bolts were pretty seized, so since I had plenty of replacement bolts, I decided not to struggle and try to save any ot the original bolts. Two of them sheared off from the pressure of a socket drive, and the other two I cut off with a cut off wheel. Luckily, none of the bolts that hold the spring brackets in place were seized! 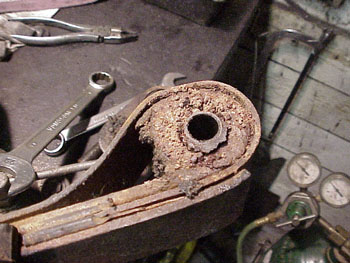 Much like the right spring eye, the bushing was pretty far gone. The steel sleeve in the center had done a pretty good job at wallowing out the bushing. 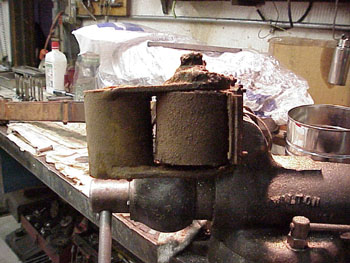 With the flat end bushing disintegrated, and the poor condition of the eye bushing, you can see how crooked the shackle bracket sat. This much deflection would have made for some pretty interesting steering characteristics! If your Vintage Ferrari seems squirrily in the turns, or you hear “clonking” from the rear of the car, I bet it’s these bushings!