It didn’t feel like there was much work done on the suspension this week, but I did more work than the pictures will show. Part of the problem was I had to pick up some more bolts to bolt the suspension together. One bolt that was cut was slightly longer than the ones I bought, so I had to make a special stop at the fastener supplier to buy some M10 X 1.0 Pitch X 100 mm bolts. So if you end up cutting off the bolts to get the rear leaf springs off a GTE, you’ll need (3) M10 X 1.0 Pitch X 80 mm bolts, and (1) M10 X 1.0 Pitch X 100 mm bolt. (How many people in the world do you really think needs to know this particular piece of information?!?) 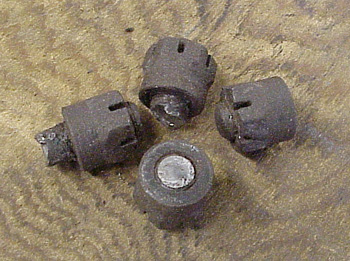 The next step was to get the seized portions out of the nuts I will reuse. I first tried soaking them in penetrating oil, but they weren’t going to let go that easily. François came over and fired up the oxyacetylene torch to help coax them out. With the ones that had enough of a protruding shank, I ground a flat spot in them to give the vise a better grip. We heated the nuts to a dull red color, and before the nut began to cool, a wrench was used to break the nut from the bolt. After a few minutes, all four nuts were free! 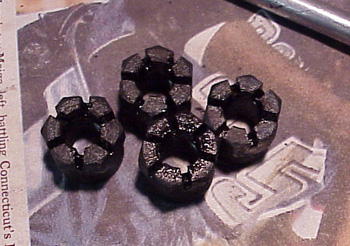 While they were cooling, I dipped them in oil to give them a poor-man’s black oxide finish. The heat from the torch makes the oil coke up on the steel, and will keep the nuts from rusting too badly.

Another project I had to tend to this week was to replace the brake master cylinder to my Toyota. It was a project I would have normally taken to my local mechanic because it would have saved me more time to work on the Ferrari, but something has happened since I’ve been doing this restoration. Very few mechanics achieve the level of quality I want to see in fixing my car, and that even goes for the Toyota! I’m sure it also has to do with the shop I currently take the car for servicing, but their mechanics are so careless and ham fisted with their work. I find myself undoing gorilla tight lug nuts, or retightening loose parts whenever I get my car back from them. Sure, it’s only a Toyota, but I don’t think I can treat anything mechanical the same way anymore!

I replaced my master cylinder, and bled the brakes in about an hour, which was less time than it would have been, making the two trips to drop off the car and pick it up when it was done! Hopefully the added “Toyota Karma” will allow me to continue spending my money on the Ferrari instead of looking for a new daily driver!