Last week I got the nuts freed from the cut bolt ends, so this week it was time to get the rest of the seized bolts out of the rear axle tube. With a stuck bolt, the plan of attack is to go from the easiest to more involved methods of bolt extraction. The easiest would be to see if they would come out with some well placed hammer blows. After soaking them for the last few weeks in penetrating oil, I haven’t had much luck in pounding these stubborn bolts loose. One thing to be aware of when hammering, however, is that often the stud will “mushroom” out from all the hammering, giving an end that will never pass through the opening. I try to leave enough room to cut off the squashed end when moving onto the next method. 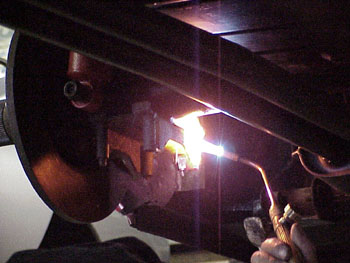 Heating the sleeves that the bolts are stuck in would be the next method of extraction. I first had to remove everything that could get damaged by the heat of the torch. An oxyacetylene torch is the only thing that will get the steel hot enough, but since steel is such a good conductor of heat, the whole area would get sizzling hot. As we moved to the rear bolts, I removed the shock absorber as well. 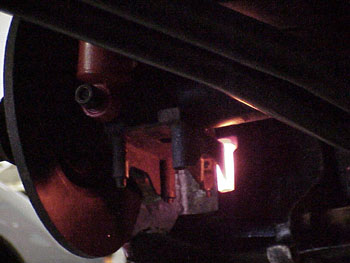 The different temperatures and rates of contraction gives the bolt a chance to release. Before the area has a chance to cool down, the bolt was struck with whatever would get it to pop out. François used a hammer, a steel drift,  an air hammer and even another bolt to drive the old bolt out. As is becoming a theme with this car, three of the bolts came out without a problem, but the fourth and last bolt was not moving. The amount of heat absorbed in this area while working on these parts began to set the penetrating oil on fire, so we decided to let everything cool down a bit before trying something else.

All the pounding on the last bolt started to bend the bracket, and although it began to come out, it looked like it jammed inside the bent sleeve. I drilled some of the the bolt out, and eventually went back to heating it and pounding it out. By the end of the day, the bolt was out, but what a struggle!

Between the hammering, and the cursing, I continued prepping the rest of the area for the rear suspension to come together. Now with these four bolts out, I can finally start putting the rear axle and suspension together and eventually get back to starting the engine!!